You'll Be Thinking of Me by Densie Webb 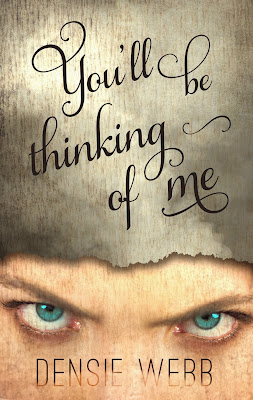 You'll Be Thinking of Me
by Densie Webb

A chance encounter with a celebrity, an impromptu video, and a shiny new espresso machine. It all added up to a juicy tale for 24-year-old Rachael Allen to share with friends. But when her best friend posts the video online, bizarre threats, home break-ins, and deadly gifts from an obsessed fan follow close behind.  Mick Sullivan, the star in her video, offers to help and in the process, Rachael discovers that despite his reputation as a player of Olympian caliber, he’s down-to-earth—and emotionally damaged. He has secrets; some he’s shared only with his pseudo best friend. Others he's shared with no one. But there's one secret he’s hidden from himself, washed away by too many beers.  Despite wildly divergent life paths, their shared southern upbringing (and a passion for good music) creates a common thread that draws them together. As the threats escalate, and their relationship deepens, Rachael struggles to accept Mick’s past—and his present. And she is forced to confront her own obsessive love to ultimately decide if being with Mick Sullivan is worth the collateral damage.

YOU'LL BE THINKING OF ME is the story of Rachael's serendipitous encounter with a celebrity, her brush with obsessive love, and the bittersweet gift left behind by the very person fixated on destroying her life.

You'll Be Thinking of Me by Densie Webb

A famous celebrity, the target of fans, paparazzi, and even over-zealous stalkers, which is probably the least glamorous thing about fame, puts one couple in the crosshairs of the world. You’ll Be Thinking of Me by Densie Webb is an eery love story/mystery/thriller that is completely riveting and will give you chills as you become entangled in a web of haunting, stalking and the power of true love being battered for all to see.

Ever helped another customer while shopping? Rachel did and found herself looking into the eyes of one of Hollywood’s hottest commodities. It seems that Mick is tiring of the glamor, the life in the fast lane and the lack of control he has over his life. Alcohol is his way of dampening the nightmare his life can be. Sex is meaningless and there is just something about Rachel’s fresh outlook on life and the way they have connected that gives Mick the strength to feel alive again. Will the paparazzi leave them alone? Will one post by a star-struck friend of Rachel’s turn into an overnight net sensation that triggers a stalker to put their lives in danger?

Densie Webb can write! From start to finish, using the POVs of Rachel, Mick and the unknown stalker, this tale becomes a chaotic game of cat and mouse that never lets up! Two likable and charming main characters and one off-kilter stalker, the journey into their hearts and minds will have you on the edge of your seat, kind of like waiting for the final straw that breaks the camel’s back. Ms. Webb has created tension that will vibrate through your body while still giving romance readers a warm tale with rough and raw edges. Brilliant writing with heartache, terror and an ending that I sure didn’t see coming!

I received this copy from Densie Webb in exchange for my honest review.