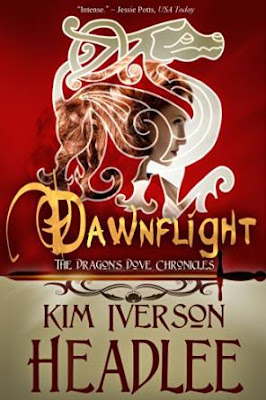 Gyan is a Caledonian chieftainess by birth, a warrior and leader of warriors by training, and she is betrothed to Urien, a son of her clan’s deadliest enemy, by right of Arthur the Pendragon’s conquest of her people. For the sake of peace, Gyan is willing to sacrifice everything...perhaps even her very life, if her foreboding about Urien proves true.

Roman by his father, Brytoni by his mother, and denied hereditary rulership of his mother's clan because of his mixed blood, Arthur has followed his father's path to become Dux Britanniarum, the Pendragon: supreme commander of the northern Brytoni army. The Caledonians, Scots, Saxons, and Angles keep him too busy to dwell upon his loneliness...most of the time.

When Gyan and Arthur meet, each recognize within the other their soul’s mate. The treaty has preserved Gyan’s ancient right to marry any man, providing he is a Brytoni nobleman—but Arthur does not qualify. And the ambitious Urien, Arthur’s greatest political rival, shall not be so easily denied. If Gyan and Arthur cannot prevent Urien from plunging the Caledonians and Brytons back into war, their love will be doomed to remain unfulfilled forever.

But there is an even greater threat looming. The Laird of the Scots wants their land and will kill all who stand in his way. Gyan, Arthur, and Urien must unite to defeat this merciless enemy who threatens everyone they hold dear.

Knights, Chieftains, warriors, Kings, battles filled with the clanging of swords where the winner takes all, including the heads of the defeated leaders and women are a commodity to barter for peace, for power, for alliances, welcome to the world that legends are made from. Do names like Arthur Pendragon, Morgana, Merlin or Guinevere or even Lancelot sound familiar? Grab your warhorse, your sword and your shield, as Kim Iverson Headlee takes us back to live alongside these legends of history as war, politics and forbidden romance are all part of her enthralling tale, Dawnflight.

Steeped in a period of unrest, one woman refuses to stand down as a warrior, in spite of her betrothal to a foreign lord who wants her to warm his bed and give him children. Ahh, politics, when will fathers learn NOT to barter with the daughter they have raised to be a fierce warrior chieftainess, to command armies and fight alongside her m armies? Gyan will do her duty and marry the barbaric lord, until she looks into the eyes of Arthur, fierce, cold and calculating. Wars have been waged for love, women scorned have sought revenge, but the bond between the fiery Gyan and the lethal Arthur is a force neither wants to deny.

Kim Iverson Headlee tells us a tale of that time, and embellishes this love story with a feeling of authenticity that bounds off the pages with all of the ferocity of warring clans, countries and the barriers that exist through language, distance and beliefs. By using Celtic words, blending fact with fiction and the skill of a great story teller, Ms. Headlee will satisfy Arthurian fans, historical romance fans and even those who love a good sword fight! She has even given us flawed heroes, as the lines of morally right versus wrong are overstepped and legends come to life as real human beings. Definitely not a light read nor one for the delicate of constitutions, whether the battles are in the dining hall with words or on a bloody field, there are no holds barred, no prancing around, particularly where Gyan (Guinevere) is concerned.

Do you like historical fiction to feel brutally hard, where the battles are personal and up close? Do you want to imagine the sounds of swords singing in the air, metal to metal contact as well as feel the passion of two souls who call to each other? I highly recommend Dawnflight as a great escape that flows like a river over rocks and through the rapids of conflict.


I received this copy from Kim Iverson Headlee in exchange for my honest review.