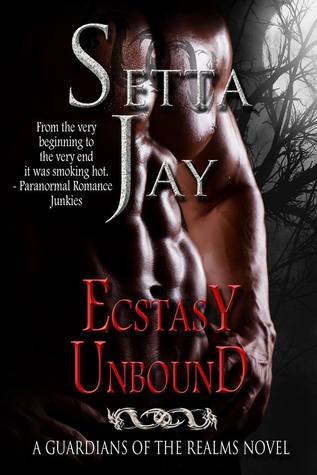 As one of the twelve Guardians, Urian has spent the last several centuries in a constant battle to keep the inhabitants of Earth’s Realms under control. Humanity has to evolve, hell beasts need to die, and Immortals need mates. But lately, Uri's mind is overrun with thoughts of when his sexy voyeur will find him again, watching him from the shadows, continuing their wicked game. All Guardians are forbidden contact with the little goddess and her brothers, but his need for her escalating, he finds it increasingly difficult to keep from pinning her down on the nearest surface and making her his.

Alexandra has managed to evade the Guardians and being cast out from the human Realm for centuries, ever since the Creators sent the Gods to sleep for their sins against humanity and banished all Immortals. Always sensing that she was needed on Earth, only once has Alex gone against her instincts and the price she paid will forever haunt her. It is for that reason she forces herself to stay away from the only male who has ever truly enticed her. The only one who has ever made her long for what she knows is dangerous.

In a desperate need to help her beloved brother, she will have to go to the enthralling Guardian, her dark obsession, and even though he will surely attempt to exile her, she won't go easily…

Gods, demigods, and all those supernatural creatures in between fill a cast of this action intense plot. Speaking of plots, there is a very strong plot, lots of world building and enough heat to burn the pages right out of your hands, Setta Jay has created the perfect balance of storytelling and erotica.

No gentle romance here, the content is adult only and graphic.

I received this copy of Ecstasy Unbound from Setta Jay, LLC in exchange for a honest review.