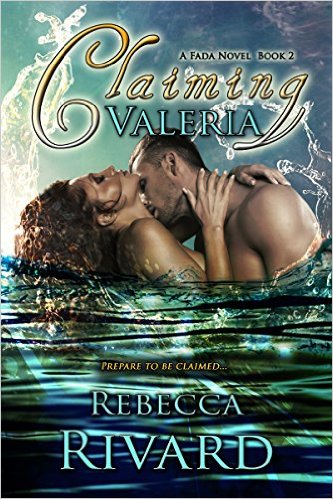 He wants a second chance…
Rui had everything he’d ever wanted. He was the Rock Run second and he’d found his mate, the sexy Portuguese shifter Valeria. But it all fell apart when he assassinated an innocent man, leaving the man’s young daughter an orphan. Sick at heart, he brought the girl back to Valeria and then went out for a night of heavy drinking that ended with him ensnared by the sun fae queen.

But can she trust him with her heart?
It was hard, but Valeria forged a new life for herself and her adopted daughter. She even found a new man. Then Rock Run’s alpha is kidnapped by the sun fae and Rui steps in to reclaim his position as second. Now he’s determined to win back Valeria as well.

A dark secret threatens them all…
But the new man is hiding a dark Gift. Soon Rui and Valeria are in a fight for not just their love, but their lives, and that of the little girl they’ve both come to adore.

Rebecca Rivard has gone all out raising the bar for herself with Claiming Valeria. With more tension, more inner conflict, high voltage action, deeply scarred romantic connections and danger from unknown quarters, two Fada must decide what they value most. Not enough to keep you glued to your chair? Right in the middle of it all, a victim, a small earth-shifter, orphaned by one of the most heart-rending mistakes ever.

Rui was doing his job, a sanctioned kill, the pack needed the money, but it became a nightmare that was drowning him in guilt and pain. Valeria is Rui’s mate, although they have not finalized the bond, but when he takes the young orphan, Mary to Valeria, she turns her back on his love, his explanation and his torment. Lost in recriminations, Rui turns to alcohol and women and slinks off into the night like a broken man, but how can he expect Valeria to forgive him if he cannot forgive himself? When a hidden evil rears its ugly head, Rui and Valeria have no choice than to come together to save those they love, and the little girl who has become a pawn in the game of dominance. Can they also save the relationship that never quite took flight? Disappearing doesn’t’ help…

Put your hands together for Rebecca Rivard, from the amazing cover to the “call-it-like-it-is” dialogue, these characters know how to cut each other to the bone, than pick up the pieces asking for forgiveness. From the waters to the land, these shapeshifters feel real, but their tolerance for each other is as fragile as a butterfly’s wings with the same doubts that creep up on us all, especially in high tension moments and matters of the heart.

Fresh, dramatic, deep, both emotionally and sexually, set your alpha-meters to HOT, your strong women meters to DO NOT MESS WITH ME, and place your bets on love taking it all.

I received this copy from Rebecca Rivard in exchange for my honest review.