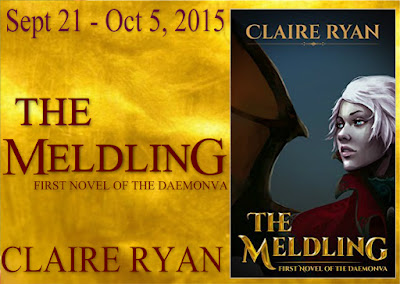 A Tale of Epic Fantasy
A Giveaway of Epic Proportions! 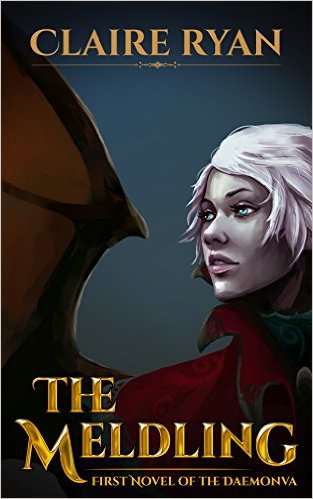 The Meldling
by Claire Ryan

THE MELDLING is a tale of epic fantasy, set in a world where humans have been driven underground by a war not of their making, and one woman must find the truth of her existence within her own heart.

She was rescued from a darkened dungeon; brought out into the light with no memory of her past. Her only certainty was her name: Suzanna.

Her flesh marks her as a daemon, one of a race of deadly warriors locked in a war with their mortal enemies, the daevas, that has scoured the surface of the world. Humans are irrelevant to them both. But it was Lukas, a human knight, who carried her from the dungeon, nursed her back to health, and protected her from harm. Her body may be daemonic, but her soul is not, and there is a far deeper connection between her and Lukas than either of them will say.

Lukas decides to bring her to Bastion, the hidden underground city of the humanva, to face the judgment of the Distant Nine. On the journey, the truth is revealed: Suzanna is a meldling, a rare fusion of daemonva and humanva. Meldlings are unstable, dangerous, and prone to total madness. Suzanna may be the first to keep her sanity, but if the Distant Nine decide that she is a threat, she will also be the last.

Suzanna must accept her past, and finally learn who or what she really is, underneath her daemonic skin. Drawn into events beyond her control, the meldling will become the key to ending the war - but will it be with the destruction or the salvation of the daemonva?

And are her feelings for one human knight real?

The Meldling by Claire Ryan  (First Novel of the Daemonva)

From the first page, one knows they have begun a journey to another realm, one filled with violence, hatred and even never ending love that runs soul deep. Humans have gone underground to avoid the devastating war waged between the daemonva and the daeva. Tortured to near death, all Suzanna can remember is her name when she is rescued by a human warrior from her dungeon prison. Suzanna isn’t human; she has the flesh and wings of the daemonva, but is a meldling, the product of a humanva and daemonva “fusion. “ A creature that shouldn’t be, feared, hated and always destroyed, but there is something different about her and Lukas feels it a she nurses her back to health and protects her.

Inside, she learns she is more than her skin would reveal and she realizes what Lukas sees in her. Can she live with that knowledge? Is she prepared for the truth and her possible destiny? Has her heart fallen for the man who rescued her? Does he feel the same or is he lost to a love from the past?

The Meldling by Claire Ryan is epic fantasy, a tale that could continue on and on as each intricately detailed page is turned, unfolding more to discover. Claire Ryan has taken us into another place and time, where magic can be used for good or evil, races have drawn lines between themselves and others and compassion for suffering may become extinct. Filled with winged creatures, sorcerers and the mystery of the Distant Nine and their powers, she dares to place the fate of an innocent creature with an unknown past at the mercy of strangers who may discover who and what she is, was and will be while holding her life in their hands. Wonderful dialogue, a touch of lightness and a romance too fragile to believe, Claire Ryan has taken fantasy on down a path of shrouded twists that is sure to engulf her readers and bring them along for more!

I was easily drawn in, saw each scene and imagined the feel and look of Suzanna’s delicate wings. That is the power of wonderful writing, taking the reader from reality and into another world! 4.5 Stars

Hello friends! As some of you may know, I print and bind the physical copies of my books instead of going down the usual route of uploading a file to Createspace or Lulu. I got into bookbinding out of curiosity initially, and then found that I liked it so much I wanted to keep doing it as much as possible. I've made paperback books, but my personal favorite is case-bound hardback books, and today I'm going to describe how I make a copy of my first fantasy novel, The Meldling, from start to finish.

This is easily the toughest part! I'm lucky because my bigÂ laser printer, a Brother L2360, can automatically do imposition (which is the arrangement of the pages into sets called signatures) and it can run duplex and print on both sides of each sheet. So each 8.5 inch by 11 inch sheet has four pages printed on it, two on each side, and each signature is composed of fourÂ sheetsÂ folded in half and tucked inside each other, and imposition means each page appears in the right order. I typeset each book myself using a program called Scribus. I used to be a graphic designer, so this isn't too difficult for me, but I wouldn't recommend it if you're not particularly technically inclined. Typesetting takes at least a day, if not longer, and it can be incredibly tricky to get right! I wasted a lot of paper on test prints before I was happy with the final result.
Here's the stack of paper that will eventually become the text block. The first thing to do is fold each sheet in half, and put each signature together. I fold them and run a bone folder along the crease to flatten it properly.
And here we are - all the signatures are folded and in order, and now we're ready to move on to the next step. 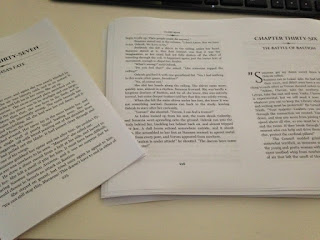 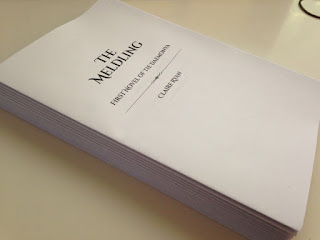 There are a few different ways to bind a text block for a hardback book, but I like to sew the signatures together using a tight Coptic stitch method. This is convenient for me because it means I don't need to add any extra margins to the inner edge of each page, and the book will lie open without the spine bending or deforming. Here, I clamp the signatures together and mark a line where the sewing holes will need to go.  It's not possible to simply sew straight through each signature with a needle - the paper is too tough - so I lay each signature flat and punch a hole through the marks with an awl.Here are all the signatures ready to be sewn, and my cutting mat full of holes! I have a few cutting mats, and I use this cheap one for punching holes with the awl. Now we're making progress. Each signature is sewn onto the one beneath it with a double cotton thread. The curved needle makes it easier to sew between the signatures. Coptic stitching is usually used with thicker thread for exposed spines, because it looks quite nice and you can do different geometric patterns with it. And here's the sewn text block. This isn't finished yet, though! The next stage is gluing and reinforcing the spine. 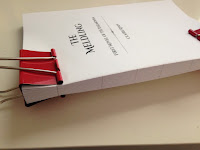 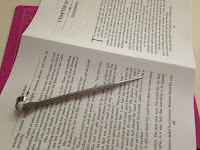 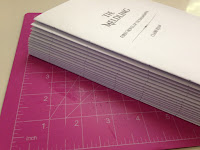 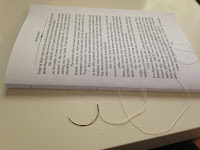 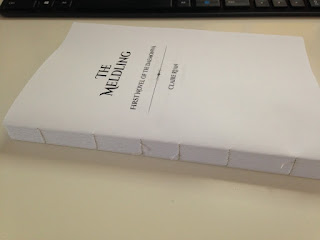 
It's not enough for the text block to be sewn together. For extra strength and durability, the spine has to be glued.The first thing I do is add the endpapers. These are slightly heavier ivory parchment paper, folded in half and glued onto the very edge of the text block's spine. The endpapers cover the paper and muslin used to attached the text block to the cover. My book press is also handmade and very battered, but it gets the job done. I've put the text block into it to keep the signatures tight while I glue the spine. I'veÂ covered the spine in a layer of PVA glue, and then added a strip of muslin and the bookmark ribbon. I add more glue on top of the muslin to make sure it's all held in place. With another strip of parchment paper over the muslin and glued down onto the endpapers, the text block is now complete! It should be very strong, and all I need to do is fit it into the cover. I've also cut the ribbon to a comfortable length, and burned the end of it with a match to seal the cut edge. 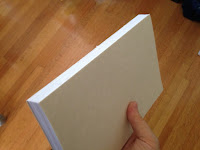 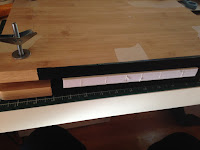 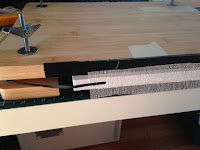 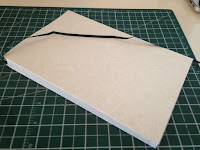 The book cover is make of paper and book board, which is a type of very thick, strong cardboard. In this case, I have some very nice handmade paper printed with a white lotus pattern. Decorative papers are expensive and unique, so once I run out of a particular type, it's unlikely I'll get another sheet that's exactly the same. I could also use cloth, if I find some cotton cloth with a pattern that I particularly like, but it's a little more tricky because I have to make my own book cloth from it. Here are the cut pieces for the cover - the front, the back, and the spine. The book board is 1/8th of an inch thick, and takes forever to cut with an X-acto blade. I've measured out the placement of the boards, glued them to the paper cover, and cut the cover paper to fit. Now I just need to turn in the edges, and it'll be ready to go. There needs to be some space between the boards and the spine in order to allow the book to flex and open properly. Here's the completed cover! The handmade paper has a few small imperfections, as you might expect. I fold the paper on the spine so that it'll fit onto the text block. Luckily, this paper is thin enough that I don't need to take its thickness into account when measuring the gaps for the cover. Now I'm ready to add the text block. The cover is glued onto the endpaper on the front and back, and then put into the book press overnight to let it all dry. I don't glue the spine or the paper on either side of the spine, because that allows the spine of the cover to move. (If it was glued, it'd tear as soon as the book was opened!) And now I'm all done! The book is complete and ready to read. Like all books I make myself, it's one of a kind. The total construction process takes about a day, including the time it takes to dry overnight. Thanks very much to Dianne for letting me share this with you. Bookbinding is a wonderful hobby, even if you're not a writer, and it's very easy to learn some basic binds by watching Youtube tutorials and searching for articles online. If you've any questions, just ask in the comments below. 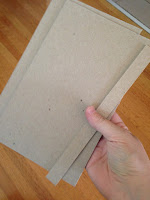 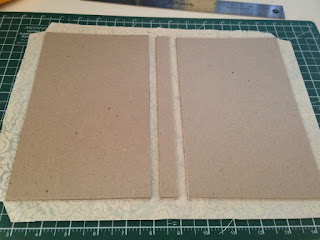 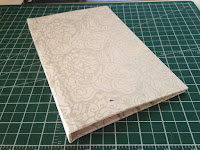 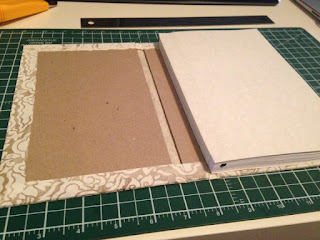 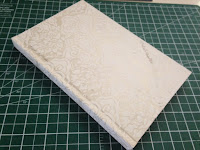 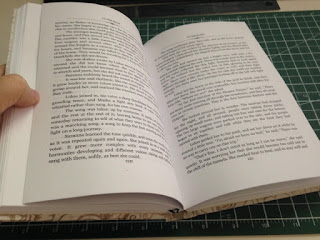 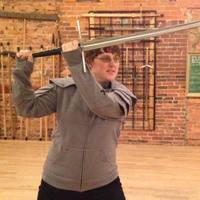 Claire Ryan is an Irish author, now living in Vancouver BC. She originally wanted to just write fantasy novels for a living, but was told from a very young age that she should do something 'practical'.

That turned into a degree in Geology, a postgrad in computers, and eventually a large dose of experience and technical skills in everything from data analysis to graphic design to marketing.

How would you like a chance to win a real collector's piece?
Claire is giving away

ONE Hand Made copy of The Meldling (US - Canada Only)
PLUS
TWO eCopies (International where allowed)
Ends October 5, 2015

a Rafflecopter giveaway
Posted by Dii at 12:10 AM