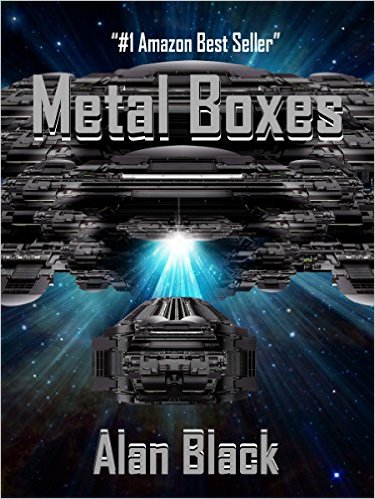 Coming of age can be hard for anyone. But for Blackmon Perry Stone it is life threatening. At 15, he barely manages to graduate from the empire's cadet training by a talent for unusual problem solving. He has trouble settling into navy life, but life becomes harder when he uncovers a ring of thieves aboard the huge ship. Life becomes difficult when they killed him. Stone is ejected into hyperspace in an escape pod without hyperspace engines. Fully expecting to die, he reconfigures the sub-light engine to escape the inescapable. To his surprise it works, but only well enough to do little more than crash on an uncharted planet. It will surprise him if he can make the engine work again, but not as much as it will surprise everyone else if he can come back from the dead. 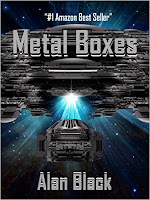 There is always an element of surprise to Alan Black’s style of writing, which is why his work always ranks high with me. Metal Boxes is no different, from the title that begs the question, “Huh?” to the last page, in spite of conflicts and deadly danger, Mr. Black keeps it light, fast and fun while taking his readers on another trip into deep space!

Get ready to follow Stone, a teen who is one part Richie Rich, one part MacGyver and one part the most unlikely and unprepared hero the Empire will likely ever see. Everyone has their little comfort zone, their area of expertise and Stone has the experience of working for and listening to the wisdom of his grandfather, the head of the largest and most powerful corporation in the galaxy, a fact that he has tried to keep secret. From discovering the theft of government property to befriending Marines, this Navy midshipman manages to entangle himself in one dilemma after another, including being “murdered” by being ejected into hyperspace in an ill-equipped ship.

His triumphant return is only half the shock of seeing the walking dead when his two new loyal pets come along with him.
Once again, Stone fumbles his way along, steps into trouble so deep, he can’t scrape his shoes clean and comes out shining like a pot of gold! Fast-paced adventure in the middle of outer space, get ready to believe in the unbelievable by letting go of reality and enjoying the single-minded focus of this author as we go to the stars and beyond, find strange new planets and watch one young man being to come into his own before our very eyes! It’s okay to scratch your head; the hows and whys are the most entertaining part of this creative space opera! Don’t question it, just strap in and enjoy the fantasy!

If you haven’t experienced Alan Black’s creative side, you are missing out on worlds that scream to be entered and enjoyed at face value! Unlikely heroes, unlikely alliances, unlikely events that DO happen! Alan Black writes what he would like to read and his efforts pay off, once again with reading that will span age groups and defies pigeon holing. This author is passionate about his craft and it shows in his versatility as he changes voices for each of his tales.