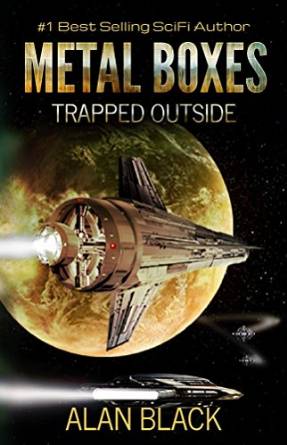 The sequel to #1 best selling science fiction novel Metal Boxes. Blackmon Perry Stone hasn't gotten over his fear of being outside and he still hasn't settled into life in the Empire's Navy. After months of legal wrangling over his last assignment, he has been given a new assignment. He was looking forward to getting an new posting on a spaceship or a station. The problem is that his new job is on a planet. Worse, once there, the base is overrun by the enemy aliens and now Stone is trapped outside on a hostile planet, injured, and hunted by aliens bent of killing him.

Stone is back, still a bit of a bumbling, awkward and hormonal teen, still capable of accidentally becoming a hero and savior and still full-time “Mom” to two young drascos. So, where is Alan Black taking us this time in Metal Boxes – Trapped Outside? We are headed back to Peebee and Jay’s home planet to begin colonization, checking for potential money-making adventures, complete with a military presence, scientific presence, civilian presence and the surprise presence of the evil four-armed aliens out to destroy humanity. Who has been “honored” with being in charge of it all? (Read that as accountable for the success or failure of the mission)Yep, the new Governor, Blackman Perry Stone and his legendary heroics continue to grow. When an alien attack causes everyone to flee their compound, Stone is once again out in the open, and struggling with his issues of being out of a metal box as he watches as lives are lost, friends go missing and injuries are eating away at their forces. Can he pull another miracle out of his pocket and save the day? How does one win in a battle against formidable foes when someone may be hiding the trump card? Stone is changing inside and out, but is this a good thing?

Again, expect the unexpected from Alan Black who does a remarkable job of creating at tale that is not only entertaining, humorous and filled with realistic dialogue, thoughts and characters, but if you peek just below the surface, you will see classic life struggles unfolding. Alphas needing power, scientists versus military on how things should be handled, people crying foul on their rights and poor Stone, stuck in the middle, relying on his grandfather’s adages to do the right thing. As a teen, isn’t it enough to deal with the hormones that come to life at the sight of a female flaunting their assets? Trust me; nothing has gone unnoticed under the skill of Alan Black’s pen. There is chaos, confusion, fear, formidable foes, fierce battles and enough quirky humor to put reality into this fantasy world. No over-the-top gritty heroes, but heroes just the same, Alan Black proves that good things come to those who read! Sit back and let go of reality, of dry believe-ability, see the planet through the characters’ eyes, ears and even through their dialogue, and never tick off a drasco, ever. This is fantasy, science fiction, the classic good versus evil and we have front row seats to it all the action.

Email ThisBlogThis!Share to TwitterShare to FacebookShare to Pinterest
Labels: Alan Black, own, self-purchased, YA Scifi, YA space opera