The Liberty Box by C.A. Gray 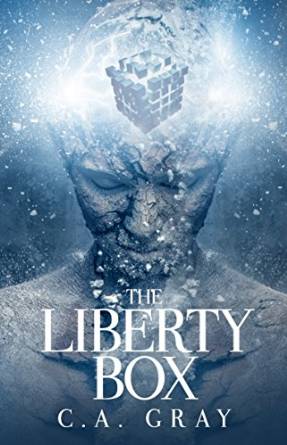 The Liberty Box
by C.A. Gray

Kate Brandeis has it all: a famous reporter at the age of twenty-four, she’s the face of the Republic of the Americas. She has a loving fiancé and all the success she could wish for. But when she learns of the death of a long-forgotten friend, her investigations unravel her perfect memories, forcing her to face the fact that she’s been living a lie.

Jackson MacNamera, trained from a young age in the art of mind control, returns to the Republic for his mother’s funeral. Within a few hours of his arrival, authorities collect Jackson and take him by force to a room ironically called The Liberty Box, where he must choose between surrendering his thoughts to the new Republic, or fleeing for his freedom.

Kate, bereaved and confused, finds her way to a cave community of refugees, where Jackson seems to offer her an escape from her grief. The two forge an uneasy bond, and in the process Jackson learns that Kate has some insight which may help the hunters in their attempt to free other citizens from the tyranny of the Potentate. Against the expressed wishes of the Council, the hunters plot a series of daring raids, attempting to prove that not only is freedom possible, but that the citizens are not too far gone to desire it. But with the odds so stacked against them, can the refugees succeed in their rescue missions right under the Potentate’s nose?

The Liberty Box by C.A. Gray

The tyranny of the Potentate is crushing both the spirit and the lives of the people. Two unlikely allies join forces to help raise the ire of the people to stand up for their rights and offering freedom to those who have the spine to fight for it. Rescuing citizens is dangerous, deadly and an almost insurmountable quest as a band of determined rebels fight the political machine of dictatorship in the Republic of the Americas.

Kate thought she had the nearly perfect life, a young and successful reporter, engaged to a wonderful man, but one investigation proves that her life has been one lie after another. Jackson knows mind control, he is captured and in The Liberty Box he is given an ultimatum, give up his thoughts or run.

Together they are about to risk everything to expose the truth to all. They say the truth will set you free, it could also get you killed. Is the Republic the land of the free and prosperous or have the citizens been tricked like the Emperor and his new clothes? Hang on tight; C.A. Gray is taking us on a terrifying journey into a world that could be our future in many ways. The Liberty Box is pure adventure, good versus evil and the power of the desire for freedom as it swells in the hearts of humanity.

Great dialogue is imperative to a good story and C.A. Gray has given her characters voices that ring loud and clear. If you are a fan of GOOD dystopian fiction that may not be too far-fetched, filled with action, tension and fighting the good fight against all odds, C.A. Gray has got your next great read right here!

I received an ARC edition from C.A. Gray in exchange for my honest review.