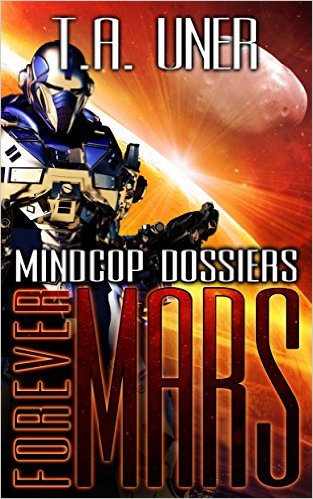 The Third Episode of the Mindcop Dossiers Series!

During a routine training exercise, Liberty Rise and her commanding officer, Captain Felix Bose, are ordered to the Shadow Works testing grounds, located on the Martian moon Deimos, to observe the demonstration of a new line of Mechaneks, android warriors that could revolutionize the future of robotics, and render human law enforcement obsolete.

But an old enemy from Liberty's past has returned from the dead to set a trap for her. And this time, there may be no escaping death.

…In 3...2...1...We have Liftoff! Next stop, Mars and beyond! T.A. Uner brings us back into the world of his Mindcops series in book three, Forever Mars. Liberty’s nightmare of the past has returned, and has become evil on steroids as Slow Fly’s diabolical scheme to build an army of android warriors and overtake Mars seems to be coming to fruition, an experimental Artificial Intelligence android is programmed to save the day. Becoming nearly human, and responding to the concept of friendship offered by Liberty, the newly named Lock proves beyond a doubt that he is willing to go to the wall in defense of his comrades. What of Slow Fly, will he finally be brought down once and for all?

It’s safe to say that good versus evil is universal and even those that are mutants will face their greatest trials. T.A. Uner has found his groove, found his special place in the world of reading and science fiction. He knows how to present grit and action on other worlds and make us feel right at home. Not a long read, there is still a lot of meat on the bones of this creative plot. A great series that is settling in for what I hope is the long run!

I received an ARC edition from T.A. Uner in exchange for my honest review.