In Memory: A Tribute to Sir Terry Pratchett 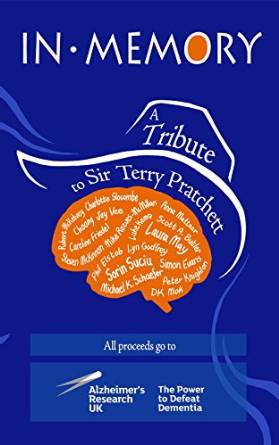 In Memory: A Tribute to Sir Terry Pratchett
by Sorin Suciu

“In Memory” features seventeen unique takes on the theme of memory from authors spanning nine countries and four continents. Written in dear memory of Sir Terry Pratchett and with all proceeds going to Alzheimer’s Research UK, these seventeen tales of magic (and the occasional automaton) will move you from giggles to tears and back again.

"This book is a fitting tribute to Terry Pratchett, a little man with a great big heart and an imagination that could not be constrained within the boundaries of our world. His work reached out to millions and will in the future reach out to millions more. Memory is everything and Terry will always be remembered." - Robert Rankin

In Memory: A Tribute to Sir Terry Pratchett

With a huge diversity of tales, each of these seventeen authors have given their own tribute to Sir Terry Prachett with their words and their gift for creating fascinating stories! Each author has also left a side note to or about Sir Terry that are as heartwarming as the method they have chosen to assist in Alzheimer’s research. Each short story revolves around the theme of memory while running the gamut of styles. Prepare to laugh, chuckle, frown and have your heartstrings tugged as these talented people pour their hearts into their tribute.

There wasn’t a story that I didn’t enjoy, as each is written with confident strokes of each pen. This anthology is a wonderful escape by devouring each tale either in small bites or all at once, like a seventeen course meal!

From the first tale to the last, each is worthy of praise. Well structured, in an order that flows easily from author to author and style to style, I would highly recommend picking up In Memory: A Tribute to Sir Terry Prachett for the entertainment and the donation to Alzheimer’s Research.

I received this copy in exchange for my honest review.