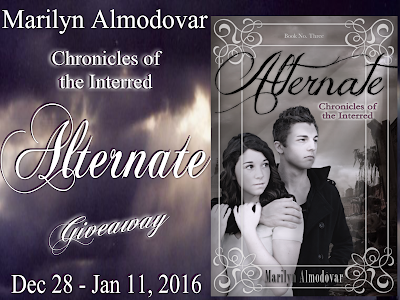 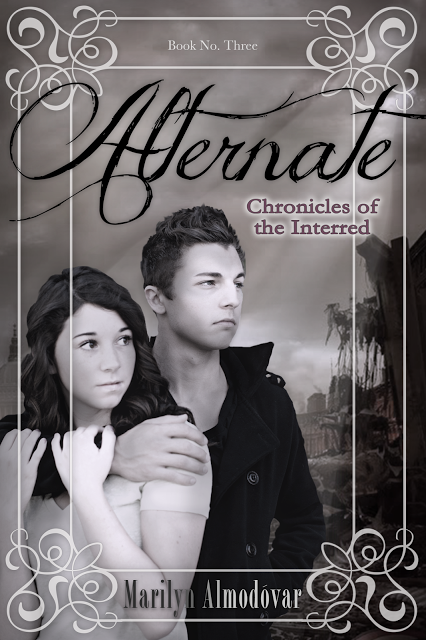 When a portal leaves Baxter trapped and powerless in an alternate world, she finds herself on the run and fighting for her life. The world’s Council wants to hand her over to Declan, and her only source of support is a broken Alternate Jack who blames her for all he’s lost. Baxter soon realizes that if she’s going to defeat Declan and get back to her world, she’ll have to reclaim her abilities and be stronger than she ever imagined.

Declan and the Absorbers’ Initiative wage war on everyone who opposes them in their hunt for Baxter. Their actions reveal what her future will be like if she doesn’t make some drastic decisions. She knows that one misstep on her part will lead to the destruction of not just this world, but her own.

In a race against Time and bitter enemies, Baxter will discover how much is at stake and just what she’ll have to sacrifice to save those she loves. Can she learn from the fate of an alternate world how to become the Time Bender she’s meant to be?

Alternate by Marilyn Almodovar
(Chronicles of the Interred, #3)

She is Baxter Number 7 in the alternate world she has found herself in. Powerless, Baxter must deal with seeing old friends who are not her friends, and, of course, Jack. But Alternate Jack is not like her Jack, he is older, sadder and bitter, blaming our Baxter for his loss of a special power, his loss of his Baxter. Would he rather see our Baxter dead than help her return home or defeat DeClan? So many things are different, yet so much feels like it should be the same, friends, not friends, some alive here while dead in Baxter’s dimension, but always DeClan is hot on her tale, chasing her through dimensions, killing off as many of the other Baxters as possible.

The time has come for our Baxter to take a stand, no matter the cost, fi she is meant to defeat DeClan, it is now or never, but how will she do it with no powers and without being sure of who stands with her? Why this dimension, why not with her Jack, the one who loves her?

Okay, I know, talk of dimensions, multiple Baxters, multiple Jacks, followers of Marilyn Almodovar and her brilliant series know what I am talking about, brilliant storytelling, weaving of fantasy and adversity, love and war and one girl, expected to save the world from the twisted grip of a deranged monster. Alternate is another edgy addition that is gripping, while alternating between being driven by the characters and the action, as well as the impending doom should all fail. Ms. Almodovar’s concept of different dimensions or planes of existence is just another fabulous weapon of words and imagination in her arsenal of creativity. Every dimension is separate and the outcomes may vary, but only in one will the final battle come. Will these dimensions clash or become the unlikely allies in the war against evil?

High tension, overflowing with emotional turmoil, precarious situations and one girl at the vortex. A highly recommended series to exercise one’s wildest imaginations, all while asking, “what if?” 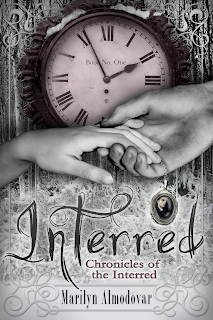 Time has never been an issue for Baxter Jacobs, but then she never knew she had the ability to Bend it.

As her sixteenth birthday approaches, Baxter inherits a pendant that will change her life. Connected to the pendant is a dark and mysterious young man named Declan Ashdown. Trapped in a Time loop for the past 122 years, Declan needs Baxter’s help to escape. The only problem is, she has no idea how to do it.

To acquire the power she needs to free him, she’ll become one of the Interred, those whose Magical abilities emerge as they come of age. When she does, she’ll discover that Declan isn’t the only one interested in the fact that she’s a Time Bender.

As the Interment arrives, Baxter knows this will be no Sweet Sixteen. A vengeful relative and ruthless Council are determined to control her. Declan’s powerful and charming descendant, Jack Ashdown, claims he can save her. She’ll soon have to decide who she can trust, and how to master her new abilities before Time runs out. 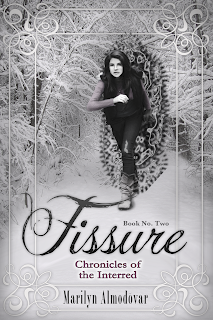 Baxter Jacobs just survived the worst Sweet Sixteen in history: buried in a coffin, hunted down by assassins, and losing almost everything that mattered to her. She’s ready for some normalcy, but “normal” won’t play any part of this Time Bender’s future.
Now that the immediate threat is over, Baxter learns just how much the English Council expects of the newest Interred. The pressure has her seriously considering her uncle’s offer to take her to New York, especially since she thinks it will keep her Healer, Jack, from overusing his abilities. Knowing the New York Council’s ranks are filled with beings using dark powers, however, makes her hesitate.

Before she can choose, the decision is wrenched from her. Fissures in Time result in a new battle with an old enemy. Someone she thought she’d lost reenters her life, and she’ll discover a web of lies woven into the fabric of Time…lies only she can unravel. Baxter will have to use her growing abilities to try and reveal the truth, even if it forever changes the reality she knows.

There are lies in the fabric of Time only she can unravel... 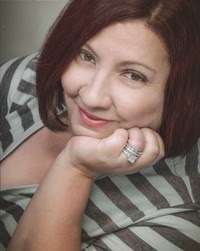 Marilyn Almodóvar is the author of a series of YA paranormal novels. Born in Ft. Huachuca, Arizona, Lyn is a lover of words whose reading tastes range from Victorian novels to the books of Stephen King. Her favorite past-times have always been reading and writing, two activities that let her escape to other worlds.

Lyn could happily exist breathing the clean air of Narnia, trapped in a cupboard under the stairs with Harry, fighting alongside Captain Jack Sparrow, doing an internship in Torchwood, or traveling around time and space with the Doctor...as long as she can have Mr. Spock, Captain Kirk and Captain Mal as companions.

To celebrate the release of ALTERNATE,
Marilyn Almodovar is offering
A $10 Amazon Gift Card
The three eBook set of The Chronicles of the Interred
That's TWO winners!
International where allowed
Ends January 11, 2016


a Rafflecopter giveaway
Posted by Dii at 12:01 AM