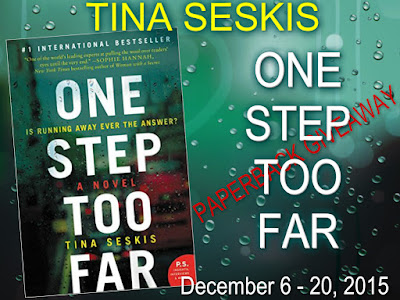 Emily has a secret...But is running away EVER the answer?
Enter to win one of TEN Paperback Copies 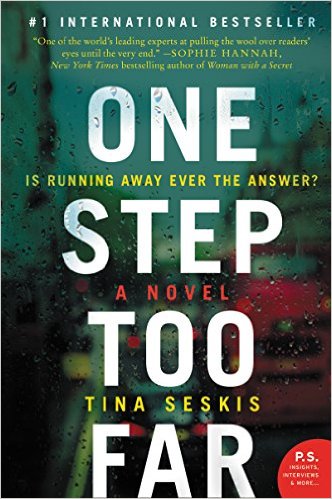 ONE STEP TOO FAR
by Tina Seskis

No one has ever guessed Emily’s secret.
Will you?
A happy marriage. A beautiful family. A lovely home. So what makes Emily Coleman get up one morning and walk right out of her life—to start again as someone new?
Now, Emily has become Cat, working at a hip advertising agency in London and living on the edge with her inseparable new friend, Angel. Cat’s buried any trace of her old self so well, no one knows how to find her. But she can't bury the past—or her own memories.
And soon, she’ll have to face the truth of what she's done—a shocking revelation that may push her one step too far. . . .
~~~~~~~~~~~~~~~~~~~~~~~~~~~~~~~~~~~~~~~~~

Tina Seskis has done a marvelous job of creating a compelling and intense novel with One Step Too Far. Written using both the present tense and flashbacks to the past, we live through the painful journey of Emily Coleman, who escapes her life one morning, turning her back on her family and her identity. Emily has decided its better for everyone if she were to leave Ben and Charlie behind. She heads to London, changes her identity, tries to recreate herself, forget the painful memories of the past. As Cat Brown, she finds she is ill-equipped to deal with life, everything is an uphill battle. With the help of a slightly quirky new friend, she stumbles through life, becomes moderately successful in her job, makes new friends, but her secret past still haunts her, its always there. Through one of her many dubious and self-destructive choices, Cat's new life comes crashing down around her.

She must face reality and her past, how it has affected her and those around her. She must learn to forgive herself for being human. Is she strong enough? Can she face her new future? Can those around her accept her as she is?

There was not one point in this brilliantly written story that I could clearly know what would happen to Cat. The tangled twists and turns made the answers illusive until the very end! The world building put me right there, watching over Cat's shoulder, living her story along with her. 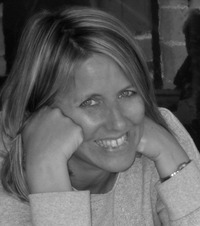 I grew up in Hampshire, England, where my father worked at Heathrow for British Airways and my mother was in sales. My parents bestowed upon me a certain degree of eccentricity: my dad amongst other things built a boat in the front garden on our commuter belt housing estate, moved us into a touring caravan when our new house wasn’t built, and took us all over the world with his free air travel and limited budget.  I think part of my story-telling is shaped by those experiences.
I studied business at the University of Bath and then worked for over twenty years in marketing, advertising and online sales, with varying degrees of success, before starting to write.
I originally wrote One Step Too Far for my mum, whilst attending a local writing class on a Thursday afternoon. I completed my second novel When We Were Friends (formerly called A Serpentine Affair) in 2011.  It took me way longer to finally get the books published, and One Step Too Far is now available in over 60 countries.
I live in North London with my husband and son, and currently write full-time(ish).

Tina is offering TEN Paperback Copies of ONE STEP TOO FAR
Enter to win!
US only
Ends December 20, 2015
Remember, books make great gifts, anytime!
a Rafflecopter giveaway
Posted by Dii at 12:01 AM