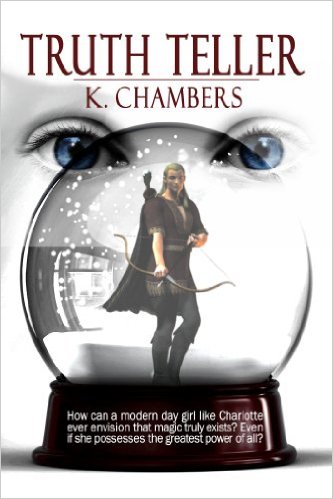 How could a modern day girl like Charlotte ever envisage that magic really exists? Even with her own vivid imagination, the place for other realms belonged in a child’s fairy tale. Or so she thought, until she stumbled across a hidden curio shop and an even stranger shopkeeper. He gives her a gift that resembles an antique snow dome, but this is not an ordinary globe. The world Charlotte has always known disappears as she’s spirited away into a mystical land.

This is the beginning of a lifelong friendship that changes Charlotte’s life forever. Discovered by a young elf alone in the forest, she embarks on a journey in search of a group of travelling Entertainers. She encounters heart-stopping dangers and real life monsters, but a far greater threat shadows her every move. Even the strength and skill of her new found companions cannot protect her against a ruthless druid assassin.

But in this realm, Charlotte is not the vulnerable little girl she thought she was.

Even though children today seem so much worldlier than we were, “back in the day,” they still have imaginations to be fired up, fantasies to live and worlds to explore. Kurt Chambers gives children a tale about a contemporary young girl who daydreams of magical places and through the magic of a special gift from a quirky little shopkeeper, may just have the chance to actually travel to a mystical land, far, far away. Truth Teller is a pure fantasy adventure for a child’s mind.

Follow Charlotte as she meets a young elf and must make a long and dangerous journey in search of travelling Entertainers, who may have one among them who knows how to get her home again. The journey won’t be easy, but she has found friends and protectors who will stop at nothing to keep her safe, but will they be a match for a powerful druid assassin?

Kurt Chambers knows how to ignite that spark of delight and fascination as he weaves his tale for younger audiences with just enough danger to create heroes, just enough “typical” childlike reactions to a long journey to feel real and characters that almost breathe. Perhaps there is not enough detail for adult readers, but we are not the target audience, younger readers need to be enticed into falling into a story, or even just picking up something to read. I think Kurt Chambers has the perfect recipe for success for middlegrade readers everywhere as he allows children to be children, to dream, to feel, see and smell the magic of his words. Do I think this will enthrall younger readers? Definitely!