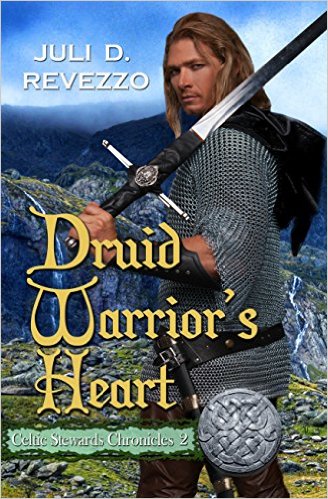 As the latest in her family’s long line of Stewards, Ruth Macken awaits the arrival of a warrior sworn to the Tuatha dé Danaan, the Celtic gods her family has served since the beginning of time. For on that day, a magical battle will erupt. A war between druids and an evil that will decide the fate of mankind.

Isaac Connel knows the battle is imminent, and is ready to fight, once again but from the moment he sees Ruth flitting around the sacred ground, he’s captivated by her fiery charms and a need to protect her.

Despite Isaac’s assurances and the dreams that guide her, what can Ruth and her lover do to drive off this evil? Despite everything, will the world end at the hands of an evil god?

Entrusted with the honor of being Stewards of the Tuatha de Danaan since time began, each generation of the Macken clan has taken their duties to heart. Travel back to 16th century Ireland as Ruth Macken waits for the warrior sworn to fight and protect the Celtic gods as the fate of the human world lies in the balance and a magical battle is about to take place between the druids and the blackest of evils.

Enter Isaac Connel, the warrior Ruth has been waiting for, but little did he know he would find more than another fierce battle when he lays eyes on Ruth. In a wonderfully magical tale of mythology and love, Druid Warrior’s Heart by Juli D. Revezzo brings the days of long ago to life where duty and honor make strong allies against evil, now all they need is a plan, the strength and the faith to win.

As love blossoms, their determination to win grows, but Isaac now must protect what is most dear to his heart but will Ruth’s fiery streak make it impossible or will his warriors rise to the occasion and win another round in the battle against evil? Can love be the needed shield in the battle or will it become an Achilles Heel?

Get ready to feel the time shift as Juli D. Revezzo builds a world set hundreds of years ago and invites us to follow the quest against evil. She has created a wonderful blend of fierce battles, powerful determination and romance that will leave her readers waiting for more! I was lost to reality as each page revealed great imagination, perfect character interaction and the power of love.

I received this copy from Juli D. Revezzo in exchange for my honest review.