Making Magic by Donna June Cooper (Books of the Kindling, #3) 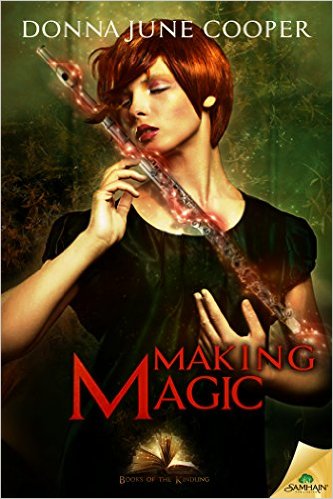 Sticks and stones may threaten bones, but her words can conquer both body and soul.

During his law enforcement career, Sheriff Jake Moser has been called to Woodruff Mountain a few times to deal with some rather weird situations. Now, recovering from a bullet wound that should have killed him and fending off his mother’s ravings about the evil that lurks on the mountain, he’s making alternate career plans.

Just as those plans begin to take shape, someone starts kidnapping newborn babies, then returning them unharmed. To make things even more interesting, an irritating adversary from his past has returned to bedevil him in a whole new, delightful way.

After her erratic psychic gift forced her to abandon her home and a promising musical career, Thea Woodruff has spent years trying, unsuccessfully, to atone for the death of Becca Moser, Jake’s sister. Once she has mourned those she’s lost and apologized to those she’s failed, she intends to flee her mountain once again.

Jake would rather she stay to compose a new tune—with him. But their complicated harmony reveals a guilty secret that threatens not only their future, but their lives…


Warning: A temperamental flute-player returns to torment an old flame, but he has other ideas, and the music they make together is combustible—and magical.

Making Magic by Donna June Cooper
(Books of the Kindling, #3)

The magic of Woodruff Mountain and the people it loves, all put into words by Donna June Cooper in her Kindling Series. Making Magic is another strong addition to Ms. Cooper’s growing list of tales. Jake Moser has lived near Woodruff Mountain and had business there is his capacity as Sheriff until a bullet ended his career in law, but has opened another door for him to enter. People say strange things happen on the mountain, and it’s true. There is magic to those who can feel it, those who are gifted with it, but is it always a gift or can it become a curse that causes pain?

Thea Woodruff has psychic powers, but they are erratic, and have caused a great deal of upheaval in her life. Guilt from the past has finally pushed her to leave her city life behind, to go home and try to makes amends with those she has hurt, hoping to free her heart and soul from the weight of the guilt she carries. Seeing Jake opens old wounds, but this isn't the Jake she knew, this is a man older and wiser, a man who looks at her like the woman she is. Has the mountain shared another piece of magic called Love with these two?

Donna June Cooper writes with an upbeat tone, weaving romance, suspense and magical moments into a tale rich in descriptions an atmosphere. Each character becomes like a friend, almost completely flesh and blood, complete with flaws. Some you will love, some, maybe not, but each one adds to the richness of this delightful romantic read.

If you like sweet romance, gently glazed with magic and the paranormal, as well as the feeling of “home” on Woodruff Mountain, this has just enough heat to keep you warm and just enough suspense to have you hanging on every word! Best thing is, you won’t have to watch over your shoulder when you’re finished and you might even have a desire to find your own Woodruff Mountain!

I received this copy from Donna June Cooper in exchange for my honest review.