Reflection: Harbinger of the Phoenix by Rachel R. Smith (Records of the Ohanzee, #2) 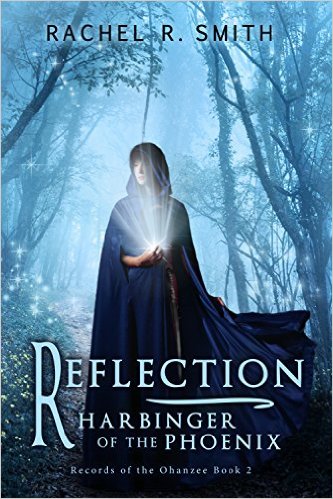 Reflection: Harbinger of the Phoenix
by Rachel R. Smith

The masquerade is over and the masks have been removed. But not everyone’s true face has been revealed…

King Casimer of Marise has assassinated the Royal Family of Chiyo and usurped the throne. He doesn’t know that the Heiress of Chiyo, Nerissa, is still alive and has joined the Ohanzee, a group of guardians who have secretly protected the country for generations. Disguising herself as a young man, Nerissa seeks a way to depose Casimer and restore her country’s independence. An uncanny stroke of luck leads her to the mysterious seer Shae, who has discovered a fragment of an ancient prophecy warning of events that will bring about the end of civilization. And Casimer has already set some of those events into motion.

With the future of not only Chiyo, but all of Renatus at stake, Nerissa and her six Ohanzee companions set out on a journey in search of the remaining fragments, where they will find unlikely allies and uncover new enemies.

Reflection: Harbinger of the Phoenix  by Rachel R. Smith (Records of the Ohanzee, #2)

The usurper to the throne of Chiyo has assassinated the Royal family, but is unaware that one rebellious action by the Princess Nerissa has saved her life, allowing her to be whisked away to safety and a new life, as she plans her moves to re-take what is rightfully hers, freeing her people from the treachery of King Casimer. Disguised as a young soldier, her quest begins and fate lends a helping hand in the form of a mysterious seer who has uncovered part of an ancient prophecy that will mean the end of humanity. Nerissa knows that the events that will bring the prophecy to fruition have begun at the bloodied hands of Casimer and time is running short to find the other missing pieces of the prophecy to save the world. The journey will be fraught with peril, intrigue and one can never know who can be trusted and who will see her demise for a few gold coins.

Within the pages of Reflection: Harbinger of the Phoenix Rachel R. Smith delivers us back to the world of the Ohanzee, the secret guardians of Chiyo and the brave young princess, Nerissa as she comes of age during the worst of times, discovers young love and finds she is clueless to what really goes on in the streets and villages of the land. Ms. Smith details each scene so well, I felt chills at the thought of bathing in an icy river, riding through storms and having to watch my every move as well as the moves of those around me. Wonderful fantasy reading in a land far, far away.

I received this copy from Rachel R. Smith in exchange for my honest review.