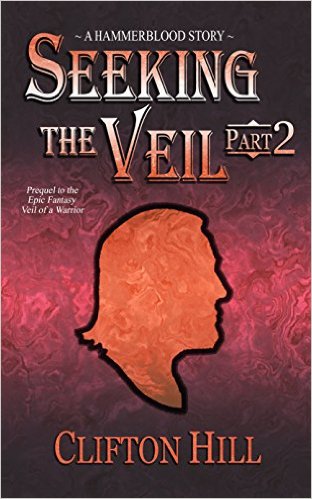 Join Hestea as he continues his travels with the Band of Orangebeard.

In Part 1, he found a power inside, and a way toward purpose. But now he must wonder what the strange power was, and how to find it again.

Seeking the Veil is a 3-part series following the adventures of Hestea Hammerblood and a prequel to the full novel: Veil of a Warrior.

Hestea has fully joined the Band of Orangebeard. He has been tested, a baptism under fire as a fighter and discovered an inner power within that rises when he needs it the most. He still must learn to understand and control his power, as well as learn the paces of a warrior in battle. He is learning the pain of friends lost in battle and his need to keep others safe is growing, like it is his destiny. Still, his newfound status is tenuous at best as he fails to draw on his powers at command.

Will he be able to stand the tests of another battle? When dark magic is involved, and evil is so powerful, it will take more than the power of the band’s magi, it will take battle-tested strength, will Hestea find his again when it is needed most?

Seeking the Veil, Part II, Clifton Hill’s next novella designed to give more depth and life to his characters while putting a finishing edge on the theme and atmosphere does a remarkable job at graphically detailing the emotions and actions of dark battles waged. Almost like peeling another layer of an onion, we are given a clearer image of where young Hestea’s destiny may lie and how young he truly is to be so dedicated to his dreams. Mr. Hill is filling each page with greater detail allowing even the sounds of his world to filter through!

I received this review copy from the author, Clifton Hill in exchange for my honest review.