The Angel of Innisfree by Patrick F. Rooney 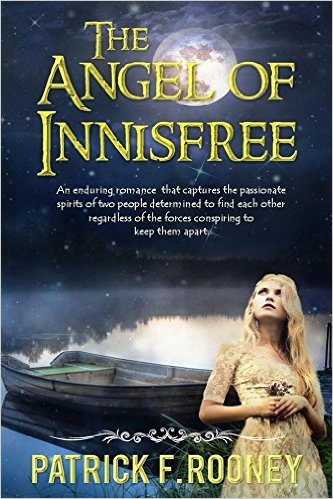 The Angel of Innisfree
by Patrick F. Rooney

It’s 1848, a time when the Irish Potato Famine has claimed more lives than anyone cares to count, while English landlords continue to evict their tenants with a ruthless lack of compassion. Young Brian O’Rourke, an educated and savvy son in an impoverished family of Ribbonmen, meets Elizabeth Reilly, a talented pianist from London, when she’s visiting her father in Ireland. After secretly promising themselves to each other at the age of sixteen, their twisted fates encounter unforeseen difficulties when Elizabeth returns to London and then follows Chopin to Paris to study piano, while Brian immigrates to America on a famine ship. Brian uses his telegraph expertise to help slaves escape on the Underground Railroad. He then travels to California to work on the Transcontinental Telegraph and to Washington to help President Lincoln during the Civil War, while Elizabeth launches a successful career as a concert pianist in Europe and America.

This epic historical drama weaves a story of love overcoming every obstacle during one of the most tumultuous periods in history, when revolutions in Europe and the Civil War in the United States shook the basic foundations of society, while inventions such as the telegraph changed the way the world worked. Their enduring romance captures the passionate spirits of two people determined to find each other regardless of the forces conspiring to keep them apart.

The Angel of Innisfree by Patrick F. Rooney

For historical fiction readers, The Angel of Innisfree will be a fascinating tale of the life and times on both sides of the Atlantic during the nineteenth century. Follow two children as life, religion, war and prejudice will separate them for decades, even after they secretly vowed their hearts to each other.

The Irish Potato Famine and the cruel evictions from English landlords were killing off hard-working Irish farmers in the hundreds. Those not killed for becoming rebels often escaped to the melting pot of America to start over. Brian O’Rourke was a proud son of Ireland who made that journey, only to find his keen mind and business sense, as well as his powerful work ethic will reshaped the life of one who lost everything. His only regret, never seeing the girl who saved his life, and stole his heart, his Angel of Innisfree.

The beautiful, English, young concert pianist, Elizabeth vowed to save herself for Brian, but her life took her to faraway places, learning under great masters in Europe. One brash decision, one marriage by name only and one voyage to America have finally put them on the same continent, but the Civil War, a brutally cruel husband and fate still kept them apart. Only when fate deems it the right time will two hearts be joined again, but have they changed so much that the young lovers they once were are gone forever?

Patrick F. Rooney has definitely written a romantic tale of long ago, that crosses decades, miles and the events of life, but in doing so, he has shared incredible hallmarks in history, cleverly inserting his characters while bringing history to life. This is not a fast-paced trip through time; this is a sometimes gritty, sometimes joyful journey for two souls, of the millions who came to this country to make their mark on the world, no matter how large or small. This is a tale to savor and relax into. Gather tidbits of the changes in this country, the people helped make them and visualize the changes occurring over several decades. Fascinating reading with heart, a slice of history that breathes and a love that endures.

I received a review copy from the author, Patrick F. Rooney in exchange for my honest review. We have no personal connections.