The Emperor's Concubine by Killarney Sheffield 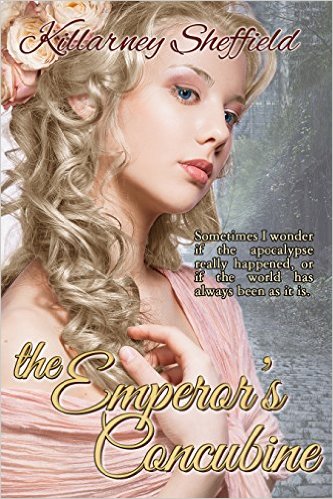 The Emperor's Concubine
by Killarney Sheffield

“Have you ever felt dead even though you’re very much alive? Sometimes I wonder if the apocalypse really happened, or if the world has always been as it is. Maybe my memories are just dreams and not reality... not this reality anyway.”

Ocean Delany wants the world to change, she's tired of the same old grey concrete existence, but on her eighteenth birthday a change happens she will regret forever. This is the time when all girls who have reached majority are called to perform the ultimate service to the Emperor, and the future of mankind. Ocean is in danger of losing the boy she loves, her family and her life unless she can find a way to fight back. Freedom has a price however. If she is willing to pay with everything she has, her dreams may yet have a chance to live. It is a story for forever.

The Emperor's Concubine by Killarney Sheffield

The great apocalypse happened years ago and the remaining survivors now live under the harsh rule of a self-proclaimed emperor, while the outside world is walled of for the population’s safety, or so they are told. The lines between the Haves and the Havenots is sharp and runs deep, food is engineered, rationed, water is rationed and plants and animals are non-existent. The weight of the emperor’s power and control is brutal, so when he announced that lucky young women will be chosen to be the vessels for the next leader and his cabinet, all eligible girls were lined up, herded in and selected from.

Ocean remembers life before the apocalypse, but she must keep her secrets to herself, or be killed, but like any teen, she is feeling cramped, controlled and yearns to be free. For Ocean, freedom means being able to choose to see what is beyond “the wall.” But first, she will face the nightmares that lay before her and show the strength of a warrior while hiding the fear of the woman-child. A movement is underway to rebel and escape, and Ocean has become its poster child. How much can she endure to help free her people? Is it fair to ask her to prostitute herself to the filth and degradation of an egocentric animal? Can she risk the love she shares with another for the lives of many? One thing she knows, it is better to die trying to live than to be a sheep at the whims of those in power.

What an imagination author Killarney Sheffield has as she takes us to another place and time, in The Emperor’s Concubine. Driven by the strength of her characters, Ms. Sheffield has spared nothing to provide a harsh look at what happens when power corrupts; festers and the masses are abused until they begin to lose their own humanity in despair. Are you looking for a heroine to follow and respect? Look no further than Ocean, the perfect role model for any female.

Aside from a few brief scenes, the sexual encounters are of a fade to black type variety, but they are powerful, they will raise the ire of decent humans and they may not be appropriate for younger YA readers. This is a story to dig into, to become involved in as we stand behind a young woman as she lives a nightmare to reach deep into the past to find freedom in the future.