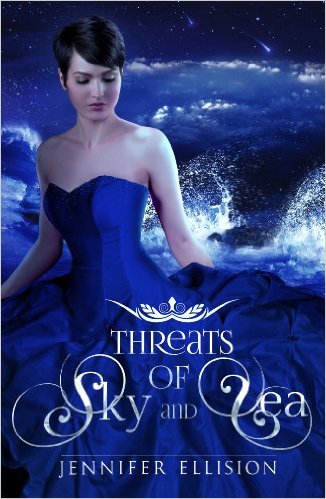 Threats of Sky and Sea
by Jennifer Ellision

Sixteen year-old Breena Perdit has spent her life as a barmaid, innocent to her father’s past and happily free from the Elemental gifts that would condemn her to a life in the Egrian King’s army. Until the day that three Elemental soldiers recognize her father as a traitor to the throne and Bree’s father is thrown in jail—along with the secrets from his last mission as the King’s assassin. Secrets that could help the King win a war. Secrets he refuses to share.

Desperate to escape before the King’s capricious whims prove her and her father’s downfall, Bree bargains with him: information for their lives. It’s a good trade. And she has faith she’ll get them both out of the King’s grasp with time.

But that was before the discovery that she’s the weapon the King’s been waiting for in his war.

Now, time is running out. To save her father’s life and understand her own, Bree must unravel the knot of her father’s past before the King takes his life– and uses her to bring a nation to its knees.

Power, the more the better, greed, and betrayals will mark a turning point in young Breena’s life as she goes from barmaid to Elemental in a brief span of time. Threats of Sky and Sea is a nicely paced fantasy of a young girl’s coming of age as her life is rapidly turned both upside down and inside out.

Parents don’t tell their children everything, but the secrets that Breena’s father kept from her could lead one of them to their death and the other into a lifetime of servitude in the king’s army. Her father was branded a traitor to the Egrian King a man once his best friend, to Bree’s shock, her father will share nothing of his past, but why not?

Far from a normal child, Bree learns she has Elemental powers so strong, she is to become the deadly weapon for the king in his thirst for victory over others and the spoils it will bring. Is this what her life is to become? Time is running out to save both her father and herself, and who to trust is a dangerous game. All she needs is a plan and for it not to fail…the battle of good versus evil comes alive again.

Jennifer Ellision has painted a fantasy world with the feel of a long ago tale. One brave and level-headed girl is about to take on a vile and twisted king, ill-prepared for what she is about to face. How refreshing to have a quick-thinking and resourceful heroine who manages to keep her wits about her as she plays a dangerous game of “who has the most power.” Secrets are kept, secrets are revealed and lives will be lost, in the end, will it be worth it? Beautiful scenes descriptions bring this world to life as charters of every ilk play out their roles to perfection. A great read that entertains and flies by from the beginning to that last page. Looks like another great series is off to a flying start!