Veil of a Warrior by Clifton Hill (Hammerblood#1) 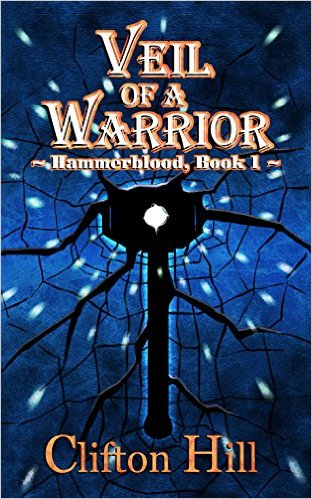 Veil of a Warrior
by Clifton Hill

One man leaves everything behind to fight in a war of the centuries. He finds hope in a foreign general, love in a woman as strong as steel, and fear in the mysterious power that he had thought was a blessing.

Hidden away in a secret Order, Hestea can not abide the inaction of his people. When political unrest opens the way, he runs from his father and the incompetent high council to seek his purpose. Hestea tumbles into a world overrun by the dark brotherhood that is the age-old enemy of his people.

The land of Molroun is a fractured place with no king, and the dreaded Saeordin look ready to conquer. Only General Zakea Dormir, his army and the will that he wields to pull Molroun together, can stem the tide from drowning them all.

And as his guard-captain, Hestea will let no one stand in his way.

But the enemy is powerful. Magic will fly, armies will collide, friends will die and the dark magi strike fear with their power.

Veil of a Warrior by Clifton Hill

Fantasy, or as in this case, epic fantasy is a collage of actions, of details and of characters that are woven together in a manner that allows the reader to breathe alongside said characters. Clifton Hill brings the magic, the danger and the fears of war among peoples in Veil of a Warrior.

Follow Hestea, a man gifted or cursed with the berserker’s rage, a one man army in himself when the veil overtakes him. He is young, a giant of a man and loyal to his general, all while being able to do feats of legendary worth.

War has come to the magical lands of medieval times. Dark powers threaten to overrun and conquer every man, woman and child who has the misfortune to be in their bloody path. Only one man dares to stand against them for all, and his army trusts him implicitly. General Dormir stands with his men on the battlefields, he fights with them, bleeds with them and grieves for the losses, but he stands firm. Beside him is Hestea, his Head of the Guard.

War takes its toll on men, especially the rich, softened by their wealth and those once brave men now cower in defeat. It is as much a battle of mage vs mage on the bloody battlefields as one by one soldiers die under the might of the enemy. Will Dormir’s men find the support and confidence they need to overcome the enemy’s assaults? What part will Hestea play?

Epic fantasy is not a simple line from beginning to end; there are subplots, human frailties, deceit, bravery and blood. The battles are fierce and well described, the dialogue is intense, and the emotional upheaval is astounding as men go up against all odds to save their homeland. Clifton Hill has built a world that comes to life a little more with each page as men go face to face, swords and hammers flailing and striking and you are there to witness every sight, sound and smell. Excellent story telling.