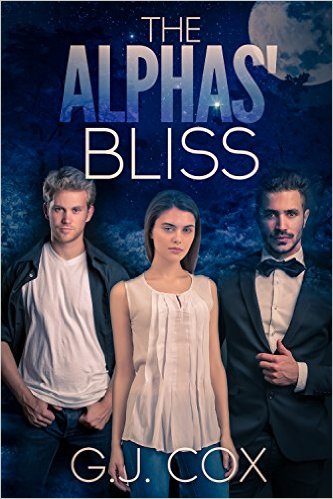 The Alphas' Bliss
by G.J. Cox

Micha, King of the Vampires and Devin, Leader of the Wolves, are two alphas who must learn to share one mate. They will also need to work together to convince said Mate to accept them both while trying to keep her safe and alive from a pack of rogue wolves who are dead set on capturing and killing her.

Bliss has lived most of her life thinking she was half human and half vampire. She soon finds out that she’s also part wolf and the mate of the Lead Alpha of the Wolves. News not so well received. While she’s dealing with all these new changes in her life, a rogue pack of wolves is also out to capture her and kill her for unknown reasons.

Will she accept her mates in time for them to help her through her vampire/wolf transition? Will her mates be able to keep her safe from the threat of the wolves?

Bliss was destined to be the King of the Vampire’s mate. As a half human/half vampire, she was trained to be his submissive, but is that what he really wanted? Micha was a reluctant mate, but duty and fate guided his path. How could he convince the shy and timid woman he was not the monster she had been told? Her vampire transition was coming and she would need him in more ways than she knew.

Then it happened, a night out, and a stranger came up to Bliss as if he owned her and he smelled good, too good. Devin was no ordinary man, he was the Alpha Leader of ALL wolves, every bit as powerful as Micha. Have the Fates been bored? Did they need to kick up a little supernatural excitement? Is it possible that this innocent woman could be the fated mate of both rulers of their kind? Bliss will need them both when her blood displays another anomaly, she also is part wolf and two transitions could kill her, unless another threat to her gets her first.

Two powerful forces, two strong rulers, are they a match for Bliss or will she bring them to their knees with her sensual desires? Hottest Love Triangle ever.