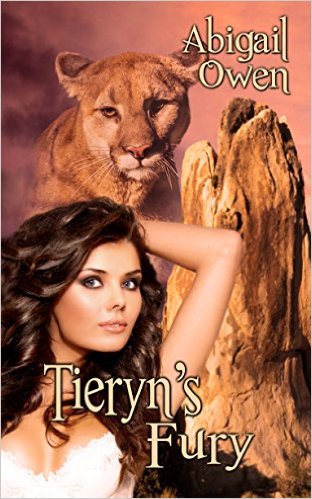 The day Shane Callahan lost his wife and was forced to run from the only home they’d ever known was the day he’d vowed he’d kill every last man responsible. He’s waited years in hiding, but is finally on the verge of taking his revenge. Until he is assigned to protect a Healer and is forced to halt in his quest.

As the Alpha’s daughter and the Healer in her Dare of mountain lion shifters, Tieryn McGraw has enjoyed a privileged life. As the fiancé of the next Alpha in line, she expects that to continue. But then she ends up on the run with a man determined not to like her…and who makes her question everything about her decisions and her future.

Shane needs her to heal more than his body. But can Tieryn heal his soul and prove to him that love is a higher purpose than revenge?

There is something about the talent of author Abigail Owen that just draws me like a moth to a flame. Tieryn’s Fury is just one more in the long list of excellent paranormal romances with that extra spark!


For years, Shane has plotted to avenge the death of his wife. Just when he thinks his hunt may be coming to a close, he is enlisted to guard and protect a powerful Healer and betrothed daughter of the Alpha of the mountain lion shifters.

Tieryn has lived the life of a pampered princess and doesn’t see that ending anytime soon, but has she become a target who must go on the run with a man who is less than social and seems to disdain her lifestyle? Is it possible Tieryn will see how shallow her life has been when she learns of what Shane has gone through to make him the man he has become? What lies beneath the hardened exterior of this warrior/protector? Could these two souls, from such different worlds find their missing half in each other? It’s time to let go of the past for both of them, but will they survive long enough to find a new future?

Abigail Owen manages once again to tell a tale that is not too dark, has touches of quirky humor and characters that become flesh and blood as they develop and change. there is no getting lost in overly drawn out details as she draws another masterpiece of shifter delight. Lots of action, great story telling and some romantic heat that will have you panting for more!