Crushing on the Cowboy by Sarah M. Anderson (Rodeo Dreams) 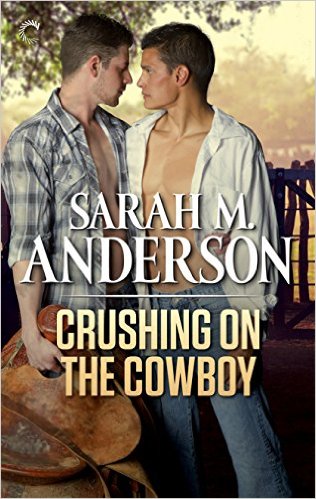 Crushing on the Cowboy
by Sarah M. Anderson

As The Heartbreak Kid, Mitch Jenner is known as the biggest womanizer of all the rodeo cowboys—but it’s just an act to keep himself safe. In fact, Mitch is so afraid of coming out that he’s opted to stay single—and a virgin. He’s fine with being alone…until he meets the mysterious Paulo.

Paulo Bernardes is here to learn the American style of bull riding well enough to teach it back home in Brazil. A namorado—a boyfriend—will distract him from his goal, but he’s captivated by Mitch, who understands him even when they don't speak the same language. In return, Paulo wants Mitch to accept himself—and their relationship.

In private, Mitch yields to his attraction to Paulo and is rewarded with a heat and tenderness he comes to crave. But he still fears exposing their relationship. And as they grow closer, Paulo wonders how he'll live without Mitch once their time together is up—how he'll pick up the pieces of his heart when it's time to say goodbye.

Crushing on the Cowboy (Rodeo Dreams)
by Sarah M. Anderson

Mitch Jenner may have realized his dream of being a rodeo cowboy, but he was far from happy with his romantic relationship status. Known as the Heartbreak Kid on the circuit, Mitch hides his true desires under the guise of a hard-partying, womanizing manwhore and yet, he is still a virgin. And then, his eyes met Paulo’s.

Paulo is a Brazilian cowboy, here to learn the American bull riding style. Able to understand but not speak English, he is both mysterious and captivating to Mitch. They definitely have chemistry beyond anything Mitch has ever felt with anyone, male or female. But first Mitch needs to man up and realize that what everyone else thinks is not nearly as important as how his heart feels a she struggles to come out about his love for Paulo.

Sarah M. Anderson’s Crushing on the Cowboy has more angst than a teen romance. Mitch was in constant fear, constantly unsure of himself and worried about others opinions to the point that it became too much. Paulo, his polar opposite, an experienced gay man was as silent as a rock, too silent, but he was able to communicate what he needed, wanted from Mitch. I think what made it hard for me to enjoy was that Mitch was so worried about himself and his prowess, he forgot to reap the emotional bond that should have been forming, as well as the fact that there is no “I” in share, feel, sex or love.

Ms. Anderson knows how to write, I have enjoyed several of her books, but this one just didn’t resonate with me.

I received a ARC edition from Carina Press in exchange for my honest review.