Curse of the Gargoyles By Rebecca Chastain (Gargoyle Guardian Chronicles, #2) 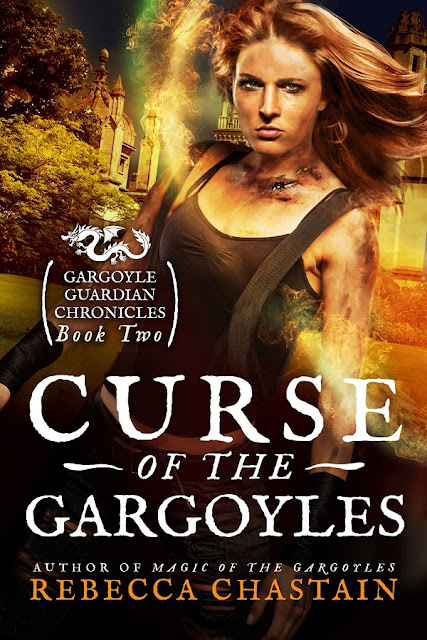 Curse of the Gargoyles
by Rebecca Chastain

Mika was trying to save a gargoyle, not doom the world...

Mika Stillwater isn’t known for her skills with combat magic. As a gargoyle healer, she spends her days mending broken appendages and curing illnesses in the living-quartz bodies of Terra Haven’s gargoyles. But when a squad of the city’s elite Federal Pentagon Defense warriors requests her assistance in freeing a gargoyle ensnared in a vicious invention, Mika jumps into the fray.

No one could have predicted that her involvement would ignite a chain reaction set to destroy the city, the world, and magic itself.

Brimming with epic magic and loveable gargoyles, Curse of the Gargoyles is the second story in the mesmerizing Gargoyle Guardian Chronicles trilogy. Fantasy fans young and old will delight in this highly original world and exciting, action-packed adventure.

Curse of the Gargoyles By Rebecca Chastain
(Gargoyle Guardian Chronicles, #2)

Heroes are made in time of great need, not born with the hero gene. Mika wasn’t even born with combat magic, but once again, she is called on to aid  the gargoyles of Terra Haven. Take a deep breath and get ready to “rock” and roll with our heroine when the elite Federal Pentagon Defense Warriors draft her to do the impossible, of course, they weren’t planning on her unique methods to almost destroy magic for the world.

Rebecca Chastain is back with her plucky heroine, her delightful little gargoyles and non-stop action all the way with Curse of the Gargoyles. Some magic user has been messing with the attaining the power of the gargoyles and her little invention is slowly draining both the magi and life out of her innocent victims. The problem? The device has taken on a life of its own, able to thwart the best of the best in their efforts to destroy its power. What they thought would be an easy unraveling of the threads of the magic becomes more knotted than a skein of yarn after the cat gets done with it. It takes Mika’s desperate, “out-of-the-box” thinking and five brave little gargoyle siblings to even have a chance at rescuing all of the gargoyles, but it may come with a price that Mika doesn’t have the heart to pay.

Kick aside all you think you know about gargoyles, magic and the Federal Pentagon (is that a play on words???) Defense Warriors, because Rebecca Chastain’s world and the characters that inhabit it are going to have you wanting a little gargoyle of your very own. Talk about brave, caring and giving, Mika is to gargoyles what Mighty Mouse was to his world! She rushes in with no thought for herself and I can almost hear her singing, “Here I come to save the day!” (For those who don’t know Mighty Mouse, Google him)

Fast, fun, furious, (oh wait that was the FPD guy, always angry), anyway, I love this series, great for any age, any time!

I received an ARC edition from Rebecca Chastain in exchange for my honest review.