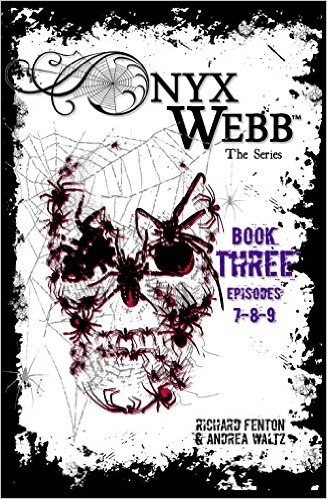 Welcome Back to the World of Onyx Webb. This is Book Three. (Episodes 7, 8, and 9) One reviewer describes it as: "A suspenseful ghost story with a light touch of horror, a heavy dose of gruesome, and a cast of characters where some, but not all, are exceptionally creepy."
The Onyx Webb series follows the unusual life of Onyx Webb along with a central group of characters in various locations and times. The billionaire Mulvaney family, piano prodigy Juniper Cole and her brother Quinn, paranormal show hosts Cryer and Fudge, and a few others make up the core of the series. Written like a book version of a supernatural soap opera, each character’s story moves forward with most every episode. It may appear that the characters are entirely unrelated and yet episode by episode, the connections will become clearer. Like being an inch away from a spider web, with each book, the web will move further and further away revealing the full story of every character and most importantly, the stunning conclusion for Onyx Webb herself.
In Book Three... It’s in the late 30's and Onyx and Ulrich have started a new life in Crimson Cove, Oregon. It’s 2010, and Koda Mulvaney is picking up the pieces of the latest tragedy and still looking for the girl in the mirror. Paranormal show hosts Cryer and Fudge have a run in with a ghost at the Open Arms. It’s the 60's and Declan Mulvaney is building the family fortune - a good intent with horrible consequences.

On the run, Ulrich and Onyx have found relative happiness in Crimson Cove, but a shocking revelation causes Ulrich to, once again try to take Onyx’s life. The time, late 1930’s. Will he succeed this time or will Fate steal his victory from his grasp? What of Onyx? Will this be the event that gives life to her ghost?

Will the brilliant entrepreneur, Declan Mulvaney have his revenge on the orphanage he was tormented in? His tormentors are gone, but the building still stands as a reminder of the evil inflicted on innocent children. Do the spirits of those victims still roam the halls? Learn how Declan went from an orphaned child to the billionaire he is now. Understand the relationship between Declan and Koda, who has seen the gifted pianist in the mirror.

What of the Paranormal Investigators, Cryer and Fudge? What will happen when they go “live” just before the demolition of the orphanage? Will they finally find proof of ghosts and spirits?

The threads of each tale are coming together through time, the characters are about to begin their own journey to toward a finish, and Onyx’s final demise will come to light. Like a Kaleidoscope of colors, each event changes the collage with just one more twist of the story and we are taken deeper into a world of darkness, deceit and spirits from beyond as this continuing paranormal soap opera gives us answers while raising more questions, while leaving us begging for more!
Onyx Webb – Book 3 by Andrea Waltz and Richard Fenton gives us characters to both love and despise, events that will leave us breathless from the anticipation of the unknown yet to come.

I received this copy from Andrea Waltz in exchange for my honest review.