A Bargain in Silver by Josie Jaffrey (Solis Invicti Book 1) 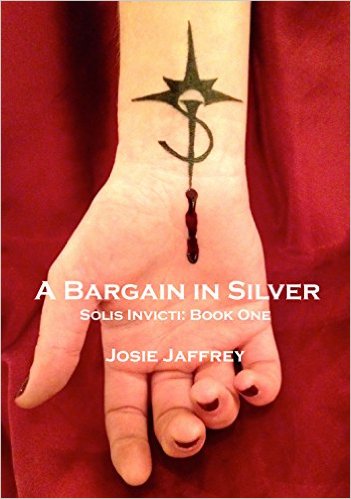 A Bargain in Silver
by Josie Jaffrey

If the price of safety is slavery, would you bargain your life?

A Bargain in Silver is book one of Josie Jaffrey's Solis Invicti paranormal romance series, set in a dystopian, post-apocalyptic London.

A deadly infection threatens to wipe out humanity. The only people who can stem its advance are the Silver, a vampiric race who offer a simple exchange: protection in return for blood and subservience. It's not a deal that Emmy's willing to make, but as her world burns around her she finds herself in the arms of the enemy and the line between oppressor and saviour begins to blur.

After an attack by the infected, Emmy is rescued by the handsome Drew who introduces her to the world of the Silver. Desperate to escape subjugation and confused by her attraction to him, she gathers what remains of her surrogate family and plans to make a break for freedom.

But despite her efforts to resist, she is drawn further into the intrigues of the mysterious Silver through the agency of their ruler, the Primus: Solomon. Emmy refuses to submit to the cold and detached Primus and an attempt on her life makes it clear that he is unable to protect her from the political machinations of his race.

As the connection between them deepens she must choose between her desire and her will to rebel, but can she trust his intentions when everyone is after her blood?

A Bargain in Silver by Josie Jaffrey (Solis Invicti Book 1)

They promised protection from the deadly infection. The cost? Complete subservience and blood. The worst has happened, or is it just beginning? Become one of the zombie-like infected or bow to the Silver, a powerful race of vampires. What would you do?

Submission is not on Emmy’s agenda, but all around her, people are dying, becoming monsters and she finds herself on the radar of the two most powerful leaders of the Silver and one of them has murdered her friends. So why is she drawn to Drew, the second in command, the one who killed her friends without thought? Why is the leader, Solomon so drawn to her? He offers a protection that is above none, but even he cannot protect her all of the time and it may cost her her life.

Dystopian, post-apocalyptic and dark, very dark, Josie Jaffrey’s A Bargain in Silver follows Emmy’s world through her eyes, her thoughts and the events directly surrounding her. Not a large slice of the Hell the world has become, but definitely an intriguing one as we follow Emmy in her desperate attempt to make sense of the world that has changed beyond imagination. One young woman, two powerful vampires, each with their own reasons for wanting her, a world of deadly intent, vile machinations and blood as the Silver become top dog in a world gone mad.

Josie Jaffrey takes on the world of the paranormal with bold strokes and a personal touch as we are invited into Emmy’s world, only a small portion of what the future holds and she is one of the fortunate ones, if you consider being the object of desire for two vampires fortunate. Will their positions of power be enough in the end, especially if she will not submit to their desires? One is in love, the others intentions are not so clear, but Emmy must decide between death, infection or slavery before it’s too late.

A powerful start to a new series building on the single focus of one young woman. Will we learn more of this world in the following books? I, for one am in for the long haul, there are too many questions I NEED to have answered!

I received this copy from Josie Jaffrey in exchange for my honest review.