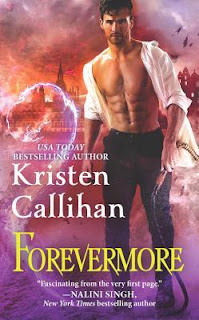 Miss Layla Starling, the young, beautiful, and extremely wealthy heiress, is the talk of London. Until now, she's managed to evade the marriage noose. Despite the fact that she is unfortunately American, she's received a staggering number of offers. And turned down every one.

St. John Evernight does not want to admit the relief he feels every time he hears that she has rejected one of her suitors. Which is unfair of him. Layla deserves to be happy. But he can not offer her happiness. He will never be normal, never be anything but a freak in her world. So St. John resolves to keep his distance, until he is recruited by the Society for the Suppression of Supernaturals to guard Layla. For she is in grave danger, and he is about to learn the full extent of his powers.

Callihan masterfully wraps up the Darkest London series with Forevermore, the seventh book in this series.

Layla is an extreme wealthy heiress, even though she is from America. She has had a huge influx of marriage proposal but none of the mean interest her like the St. John Evernight. Although, he has never proposed.

John, aka Sin, is conflicted between his desire to have Layla and his oddness. He wants her to have the best match but with his “powers” he will never be that man.

He is inducted into the Society, where he discovers a horrible plot to use Layla in the advancement of the evil the Society is fighting against.

Sin has a hard time coming to terms with his feelings but he will do everything in his power to protect Layla. Layla truly knows the art of pushing buttons and it’s a delight to read.

Tying in (pretty much) all past characters, Callihan brings us a tale of friendship and love.

Sexual tension followed by extremely steamy romance, makes this Historical, Scifi, fantasy jump off the pages straight into your imagination.

I received this ARC copy of Forevermore from Forever (Grand Central Publishing) in exchange of a honest review. This book is set for publication June 28, 2016.