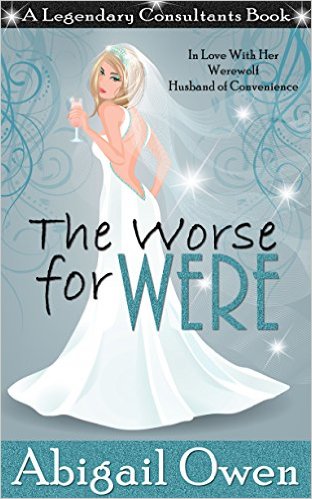 The Canis and Banes packs of werewolves have been feuding for centuries. The Hatfields and McCoys were a tea party in comparison. Until Marrok Banes, the Alpha of his pack, decides to end the fighting with a marriage of convenience. Never mind that he can’t keep his hands off his gorgeous new mate.

Tala Canis is the new Alpha of the Canis clan, the first female to claim that right, a position hard fought and won. For the sake of her people she agrees to wed Marrok. Never mind that the Alpha, once her enemy, makes her body flash heat with a single look.

But after the mating ceremony, Marrok only seems interested in one thing…taking over their combined pack while leaving Tala out of the loop. If her Alpha mate can't learn to share, then it’s time to show him exactly why she's an Alpha herself.

This political were mating was to bring peace to two packs that were always at each other’s throats. Hmmm, what’s wrong with this picture, two alpha leaders, one new in her role, while he is established and used to having the final say? Something tells me the fur will fly. Tala is a new, yet very powerful alpha, but her hold on her pack is still tenuous and untried. It is imperative that she maintains control, but Marrok seems to be over-shadowing her power and undermining their mating by assuming he is the leader with the final say. Can you say, I am woman, hear me roar? Come on, Marrok, this is the twenty-first century and your mate is far from a shrinking violet! Oh, and then there is the little matter of that prophecy that everyone is hoping will come true…will it bring peace to the weres or will one magical nymph have to nudge it along?

The one thing they do have in common, without argument is they are steaming hot, like lava rolling downhill and taking turns being in charge between the sheets is proof that making love and not war is so much better.

Abigail Owen’s The Worse for Were is fun, fast, furious, and flaming as two alphas learn their fate is to become one powerful voice for their united packs. You want a tough, yet feminine heroine? Meet Tala, and do NOT cross her! Like seeing that “Aha moment” for an all-alpha male, making him even sexier? See Marrok realize the error of his ways! Who says an old dog can’t learn new tricks?