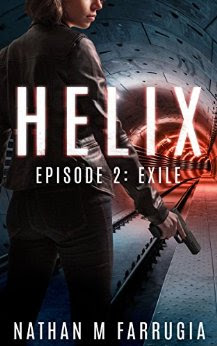 Covert operatives are disappearing, and nobody knows why.

But Olesya will put everything on the line to find out. After narrowly escaping a subway explosion she was assigned to prevent, she is too late to stop unknown assailants kidnapping her best friend.

Forced away from her hunt by the Directorate, Olesya is exiled to the frozen borderlands of Kaliningrad, where she discovers a new and deadly threat that could destroy them all.

Except Olesya isn’t the only one searching for answers. Rogue operatives Damien and Nasira are caught in a violent raid on a Colombian research facility. They manage to slip away unscathed, realizing the answers they seek lie hidden inside a Las Vegas military base. Getting in will be easy, but getting out will be somewhat challenging, given they’re now high on the U.S. Most Wanted Terrorists list.

They knew it could happen, it is part of the job description, part of the danger they live with. Operatives are inexplicably disappearing and Olesya will risk everything to destroy the unknown assailant, especially as her best friend has become a victim, too. Not alone, others are also searching, including rogue operatives who are tracking answers that may be found in a military base in Nevada. Where do their allegiances lay? Once members of the Fifth Column, they are forces to be reckoned with…and another is on a mission to tame them at any cost. Meanwhile, yet another is working in the shadows, are they friend or foe? There is no doubt they are well-trained and dangerous. As they say, the plot thickens and Nathan M. Farrugia is the brains behind the non-stop action, intrigue of Exile the second episode in the highly intense Helix series.

Nathan Farrugia bolts out of the gate locked and loaded for high intrigue as his characters play out each scene with deadly precision. If you like your action figures to live and breathe, fearlessly blazing into the fray, this episodic series is a must read that will leave you breathless!

I received this copy from Nathan Farrugia in exchange for my honest review.
Posted by Dii at 11:56 AM