Kings or Pawns by J.J. Sherwood (Steps of Power: The Kings Book 1) 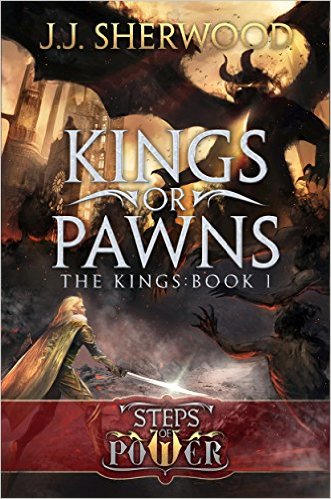 Kings or Pawns
by J.J. Sherwood

The first book in JJ Sherwood's Steps of Power epic fantasy series. The Kings, Book I: Kings or Pawns is a political intrigue that spirals into an action and adventure series as the final events unfold.

8,994 P.E.—The elven city of Elvorium has become corrupted to the core by politics. With his father dead and The Royal Schism at his back, Prince Hairem becomes the king of the elven world on Sevrigel. Young and daring, Hairem is determined to undo the council’s power, but quickly finds his loyal council members brutally murdered by an assassin loosed within the city.

As corruption and death threaten to tear the city apart from within, the warlord Saebellus threatens the city from without, laying siege to Sevrigel’s eastern capital. With the elven world crumbling around him, Hairem finds himself in a dangerous political balance between peace and all out war.

Kings or Pawns by J.J. Sherwood
(Steps of Power: The Kings Book 1)

Fantasy, particularly epic fantasy is a true escape into other dimensions. J.J. Sherwood’s Kings or Pawns is epic fantasy that slowly introduces us to a world filled with mythical creatures, elves, political deceit and machinations and one young king determined to bring peace to the lands. Follow Hairem as he tries to undo the political corruption that has scarred his father’s kingdom. As his world is slowly crumbling from within, there are powerful and vile forces attempting to take the land at its weakest time. Can this young warrior undo the horrors that have been done to his world? Does he have the strength and mind to defeat both the warring factions and his own advisors? Murder at every turn with an assassin in the mix, who can Hairem trust? He finds a strong ally in a servant girl who dares to break the class barriers as she gives reluctant advice to Hairem. Peace or war, what is the path he will choose?

Prepare for intensity in this amazing tale, absorb the world building, the glossary and the maps provided as they all come together to bring Sevrigel to life. J.J. Sherwood’s ability to breathe life into words on a written page is phenomenal. Enter this world and feel the pull to become one of the well-developed characters, some you will like, and others you will loathe as reality becomes blurred and the rest of the world fades away! There is never a dull moment, never a chance to take a breath in this world of chaos as one young man begins a journey that will seem impossible, unless taken one step at a time.

Fabulous reading for fantasy lovers or anyone who enjoys good writing and great storytelling!

I received this copy from JJ Sherwood in exchange for my honest review.