The Price of Silver by Josie Jaffrey (Solis Invicti, #2) 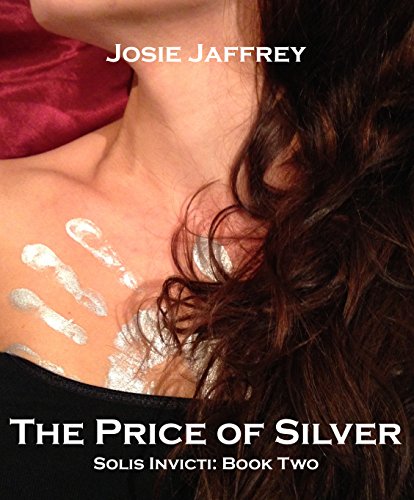 The Price of Silver
by Josie Jaffrey

In the straits of necessity, sometimes there isn't room for freedom.

The Price of Silver is the second book in Josie Jaffrey's Solis Invicti paranormal romance series, set in a dystopian, post-apocalyptic London where a deadly infection threatens to wipe out humanity. The only people who can stem its advance are the Silver, a vampiric race who offer a simple exchange: protection in return for blood and subservience.

Emmy is fenced in by the city, the walls marking the edge of safety closing in around her and sealing her in with one vampire who loves her and another who wants her dead. As she struggles to keep herself and the people she cares about alive, her fellow humans chafe against their enforced submission, and it becomes clear that there are bigger schemes and greater deceptions in play than she had ever imagined.

All the while, the monsters wait outside the barricades for their moment. Of one thing she is certain: without the help of the Silver, the humans won't be safe for long.

The Price of Silver by Josie Jaffrey (Solis Invicti, #2)

Post-apocalyptic London. A deadly infection is running rampant and the best bet on survival lay in the hands of a vampiric race called the Silver. The cost? Subservience and blood. For some, the choice is easy, becoming Silver property means life (of sorts) while the infection means becoming a zombie.

Emmy will be no one’s slave, but two of the most powerful leaders of the Silver find something special about this outspoken and beautiful woman, and she finds herself drawn to them. Her main concern is to keep both herself and those she cares about alive, but will her cost be too great?

Even the friends she has made among the Silver hide things from her. Others plot to end her life, through lies and an intentional lack of protection. When even the humans turn their backs on her, she is alone with no safe haven to run to. The delicate dance she plays between Sol and Drew has caused her to fall from grace as the final knife gashes the balloon of her false reality. What now? Now that she knows the ugliest of truths, will she become a pariah to the Silver?

Fabulously twisted, dark and intense, the lines between good and evil become gray smears as Josie Jaffrey plummets us into book two of the Solis Invicti series with The Price of Silver. Emmy, an extremely strong heroine is caught in the middle of the humans and Silvers, yet, never once does she fail to choose her battle and choose them wisely. Sol continues to be a dark enigma and Drew’s character also seems more mysterious as Ms. Jaffrey leads us through threats, deaths and hideous truths.

I received this copy from Josie Jaffrey in exchange for my honest review.