Up in the Treehouse by K.K. Allen 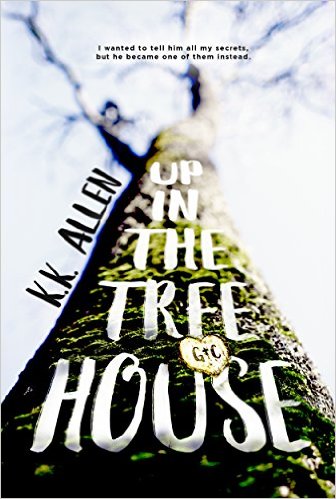 Up in the Treehouse
by K.K. Allen

I wanted to tell him all my secrets, but he became one of them instead.
Chloe Rivers never thought she would keep secrets from her best friend. Then again, she never imagined she would fall in love with him either. When she finally reveals her feelings, rejection shatters her, rendering her vulnerable and sending her straight into the destructive arms of the wrong guy.

Gavin Rhodes never saw the betrayal coming. It crushes him. Chloe has always been his forbidden fantasy--sweet, tempting, and beautiful. But when the opportunity finally presents itself, he makes the biggest mistake of all and denies her.

Four years after a devastating tragedy, Chloe and Gavin's world's collide and they find their lives entangling once again. Haunted by the past, they are forced to come to terms with all that has transpired to find the peace they deserve. Except they can't seem to get near each other without combatting an intense emotional connection that brings them right back to where it all started . . . their childhood treehouse.

Chloe still holds her secrets close, but this time she isn't the only one with something to hide. Can their deep-rooted connection survive the destruction of innocence?

Up in the Treehouse by K.K. Allen

Grab the tissues, maybe an anxiety ball and put out the DO NOT DISTURB sign, K.K. Allen has a tale to tell that will pull on every emotion you have, chew your insides up and leave you feeling raw. Up in the Treehouse is a tale of three young friends, twin brothers and the girl on the other side of the woods, a treehouse, growing up, heartaches and the end of innocence when one devastating event shreds the very fibers of trust, friendship and love.

Remember how confusing it was when you were a teen? In love one day, in doubt the next and crushed by the weekend? Devon, Gavin and Chloe grew up together, their treehouse was witness to the years they were inseparable, their growing pains, their joys and the pain of loss. For Gavin and Chloe, one devastating nightmare would continue to haunt them for years, each shattered by that nightmare and each too young to understand what the other needed.

Now, years later, they are back in each other’s lives and the hurt, the misunderstandings and their emotions have flared into a raging inferno that neither seems able to control. Too many secrets, too many unspoken words and too many mean-spirited people have come between best friends who feel more than friendship for each other. Is there a way to build what they almost had so long ago? It is time for total honesty and as their walls come down and they let each other in, but one lie of omission could bring their newfound relationship toppling over the edge. They say you can never go back, but is there room to go forward?

K.K. Allen has held nothing back in this emotional rollercoaster, secrets are pulled from hearts as truths are revealed, and I felt every single ounce of joy and pain these characters felt. With breathtaking detail, K.K. Allen allows us into the hearts and minds of the children who grew up, faced tremendous obstacles and became the people they are today. The question remains, do Gavin and Chloe belong together or is it just another childhood fantasy to be laid to rest?

I received an ARC edition from K.K. Allen in exchange for my honest review.