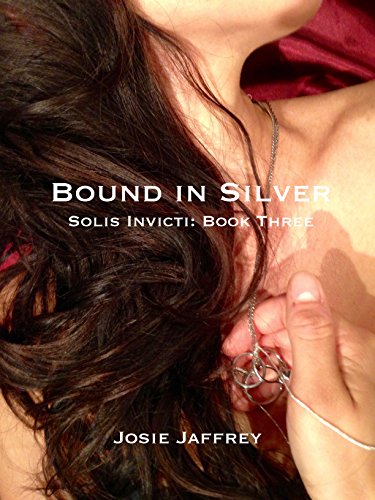 Bound in Silver
by Josie Jaffrey

If you're living against the clock, try not to do it in a cage.

Exiled from the city and from the affections of the vampire who had loved her, Emmy finds herself pushed into a captivity she never expected to experience. With the bond to her former protector broken, she knows that the chance to turn Silver is now a monstrous obligation rather than a glittering opportunity.

In an unfamiliar place among unfamiliar people, Emmy feels deserted by those Silver she had thought of as friends, out of sight and out of mind. If only her enemies were equally forgetful.

Bound in Silver is the penultimate book in Josie Jaffrey's Solis Invicti paranormal romance quadrilogy, set in a dystopian, post-apocalyptic London where a deadly infection threatens to wipe out humanity. The only people who can stem its advance are the Silver, a vampiric race who offer a simple exchange: protection in return for blood and subservience.

Emmy’s independent and rebellious ways have really done it this time. Unlike humans, the Silver do NOT think, act of feel in the same manner. They see a problem, they eliminate it or bring it to their side, one way or another. Wrongly accused of inciting and participating in an uprising when she and Oliver relied on a Silver to back them up, they are both exiled in the midst of the unprotected lands. Who knows how long Oliver will be punished and imprisoned, but of Emmy she knows her time has an expiration date, heck even her humanity has an expiration date now that she has committed to becoming Silver, although the alternative could be even worse. Guess her silly human emotions made her think she had friends among the Silver, friends in high places that could easily have protected her, yet they are among the first to turn their backs and their fangs.


The time is drawing near for the end of her existence as she knows, which monster will she become? Will someone have the decency to kill her if she becomes one of the zombie-like infected?
Her nightmares are not over as she is cruelly drained of her blood to near death and the hour arrives for her “glorious” ceremony. If only she hadn’t tried to play their games or hard to get, but that would mean betraying all that she is…besides who created the problem in the first place, eh Silvers?

Take a bow Josie Jaffrey for creating the Solis Invicti series and making each book better than the next! A Bargain in Silver just may be the best yet! Dark, emotionally taut and edge-of-your-seat riveting. Ms. Jaffrey’s take on Vampires, their world and their power has me awestruck! And Emmy? What a character, headstrong, intelligent, and well, just a little naïve at thinking the vamps will play fair. Even as she has caught the eye of both the number one vamp and his second, she is still just a walking blood bag who has become a source of trouble. Love Her. Vampires who run the gamut of personalities, too, but again, what else could I expect from an author who has taken me places I never dreamed of going! This one is blazing bright at the top of my growing hidden gem pile, in spite of those endings that end right in the middle of the tunnel with the bright lights coming at you!

I received this copy from Josie Jaffrey in exchange for my honest review.
Posted by Dii at 3:52 PM