Heroes or Thieves by J.J. Sherwood (Steps of Power - The Kings - Book 2) 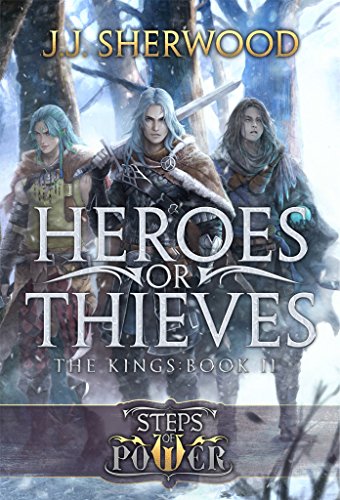 Heroes or Thieves
by J.J. Sherwood

A dark and ancient magic has resurfaced upon Aersadore, and it serves the new lords of the elven nation. Disgraced and on a land far from home, Jikun yet finds himself in the midst of Sevrigel’s inner turmoil. When he accepts the siren call to rectify his past mistakes, he soon determines that to walk the path of the hero, he must first become the thief.

As Sevrigel’s new rulers exact genocide upon all who oppose them, the shadow of their reign takes shape. Their necromancer, whose name is spoken only in whispers, is rising in power, striking down all upon Ryekarayn who might dare to offer the elven nation aid. If Jikun wishes to secure his country's future, he must first defeat the man who Ryekarayn has named Death itself.

Heroes or Thieves by J.J. Sherwood

The new rulers are brutal to all who opposed them. The elven world has become a dark land, filled with evil intent and powered by the darkness of necromancy. Saebellus has decimated Jikun’s army and the once proud and powerful general is shattered by shame. He has let his people down and is left to remind himself of his failings with every heartbeat. Determined to redeem himself and save his land, only one thing will appease the brunt of his pain, kill Saebellus, but how does a mere general kill death, itself?

The king is dead, was it suicide as the people think or was it cold and calculated murder, witnessed by the loyal, yet mute servant girl, Alvena? Will she fall into the hands of the very person responsible for her king’s death?

Far from home, Jikun and Navon will search for answers, as they steal into the night’s shadows and become like thieves themselves. It is a cover or have they been lowered to such unseemly positions to survive? What about the vile and devious Ilsevel? Will her reign be ominous as it seems? Who will succumb to her charms and who will see through her? Will her foes live to tell about it?

J.J. Sherwood is breathing new life into the epic fantasy genre and it’s time to take notice! Heroes or Thieves is just as tumultuous and chaotic as book one and as they say, the plot thickens, becomes darker and there is a sense of urgency throughout. In the time honored way of delivering true epic fantasy, there is never a dull moment, a time to rest and take a breather and nothing is as it seems at first blush. One thing Ms. Sherwood does is bring each of her characters to life with personalities that are not always pleasant, but so necessary to fuel the turning of each page. From the intelligent, the innocent to the dark and despicable, the battles will rage on the field and in the hearts and minds of these characters. Who can be trusted? Is someone strong enough to be the conquering hero or will a reign of terror win out?

Expect the unexpected Ms. Sherwood advances on the next addition to this amazing series. Prepare to be caught in her web of creativity and all of the surprises it brings.

I received this copy from J.J. Sherwood in exchange for my honest review.