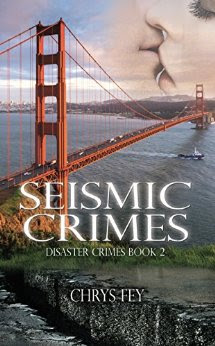 An Internal Affairs Investigator was murdered and his brother, Donovan Goldwyn, was framed. Now Donovan is desperate to prove his innocence. And the one person who can do that is the woman who saved him from a deadly hurricane—Beth Kennedy. From the moment their fates intertwined, passion consumed him. He wants her in his arms. More, he wants her by his side in his darkest moments.

Beth Kennedy may not know everything about Donovan, but she can’t deny what she feels for him. It’s her love for him that pushes her to do whatever she has to do to help him get justice, including putting herself in a criminal’s crosshairs.

When a tip reveals the killer's location, they travel to California, but then an earthquake of catastrophic proportions separates them. As aftershocks roll the land, Beth and Donovan have to endure dangerous conditions while trying to find their way back to one another. Will they reunite and find the killer, or will they lose everything?

They met during a hurricane in Florida and now Donovan Goldwyn and Beth Kennedy find themselves in another of Mother Nature’s furies in California as they follow the clues to find the murderer of Donovan’s IA Investigator brother. A catastrophic earthquake has brought buildings to their knees, injured and killed many and cause these two to be separated in the aftermath of total destruction. Could they get lucky and find the dirty cop has met his demise? Can they find the final proof that Donovan is not his brother’s killer?

Like looking for a needle in a haystack, these two will face danger, guns and the seedier side of life in an effort to bring justice to a cold-blooded killer. The tension runs high, the action is non-stop and the heat between two people who have only recently met is as sizzling as molten lava.

Beth has great instincts, true grit and the heart of a lion, willing to do anything for Donovan to keep him safe and sane. Donovan is desperate, destroyed and willing to go to any lengths to find his brother’s killer, but without Beth, he may take things too far and rack under the pressure.

Follow these two as the uncertainty of their situation takes them deep into the abyss of the underbelly of society. Watch their relationship grow, even during times of stress and learn to appreciate the writing prowess of author Chrys Fey in Seismic Crimes. Well written, non-stop, rapid-fire storytelling will keep readers on the edge of their seats while the romance that is growing between two wonderful characters will leave you just as breathless.

I received this copy from Chrys Fey in exchange for my honest review.