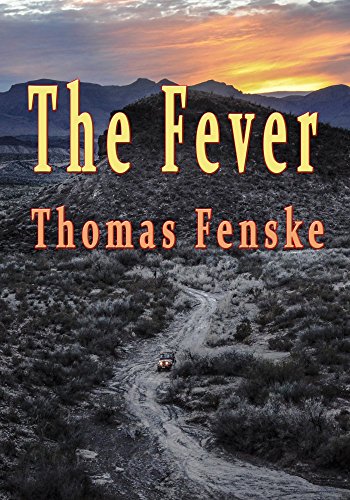 The Fever
by Thomas Fenske

What if fate dropped the possibility of adventure and riches on your doorstep? Would you be mildly interested and very skeptical or would you seize the moment to become a modern day goldminer on a mission to find the lost treasure? How far would you take your quest? An afternoon of hiking? A week, or could you become obsessed to the point of isolation from the world with every breath being taken to further finding a needle in a haystack?

Sam became completely absorbed in finding the gold a dying drunk swore existed. He was told,”… find it and its yours,” and that is exactly what Sam intends on doing, no matter how long it takes or what he has to give up to reach his goal. The greatest thing Sam may lose is himself, and he hasn't a clue.

This is Sam’s story, and readers will feel they are sitting like a fly on the wall in Sam’s life, from the tiniest detail in the weather to the breath taken in a conversation. Every trip into the mountains is to narrow his search grid, but it is the moments in between that grab the largest share of the story. Thomas Fenske has done a marvelous job of bringing a modern day gold rush story to life, even if it is through the eyes of only one man who has caught The Fever.

As time passes and Sam’s obsession takes on mega proportions, people will come into his life and leave, some making a huge impression, some a blip on the radar. Believers in his mission are few and far between, but his true friends are always somewhere in the background. What will they say if Sam does find his pot of gold at the end of the trail? Will he get the recognition and redemption he craves?

Thomas Fenske has an eye for detail, from the smallest item in a scene to the words spoken, although at times, I felt the dialogue to be just a tiny bit unrealistic. Twists of Fate, or planned events may throw Sam into a frenzy. Mr. Fenske has created a believable character in Sam, a lonely man without a purpose who has molded the search for lost gold as a replacement for moving ahead in life

I did want to feel every step of the way on Sam’s hikes, and I was surprised at how unprepared he would be camping out in the elements. Then again, do Leprechauns pack for survival when chasing down the pot of gold at the end of the rainbow? Will Sam find his gold? There’s gold in those hills and Sam may never let go of that thought!

I received this copy from Thomas Fenske in exchange for my honest review.