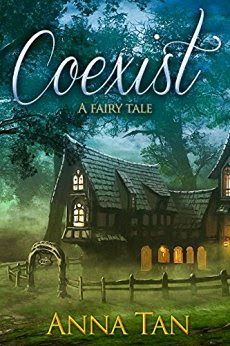 Jane Hays has been told all her life that it’s dangerous to be out in the forest past sundown. At fifteen, she’s quite sure that it’s all old wives’ tales... yet, why does her village bar the gates every night? Why do they even have gates? When she is caught in an unexpected rainstorm on her way home, Jane ignores all the warnings and seeks shelter in a cottage in the middle of the forest. Soon, she is caught up in a world of magic and beauty – and in the storm of the Fairy Queen’s wrath.

The Fairy Queen is out for blood. There have been intruders - human intruders - in her domain and she will stop at nothing to find them and kill them. After all, it is only fair. She is only seeking retribution for the death that humans leave in their wake.

But Jane isn’t all that she seems to be. And the events of the night aren’t as innocent as they appear.

A tale of magic, fairy creatures and family, Coexist is a novella for the young and the young-at-heart.

Fairy tales, we’ve all heard them, read them and know they happen in a magical land filled with creatures who may or may not look like us. They all have one thing in common, they are magical, they have good people and very bad people and there is conflict that must be resolved for a happy ending.

Welcome to Anna Tan’s world, where the title tells its own story. Coexist is a sweet tale with a hidden lesson in there, filled with centaurs, sprites, humans, elves and an ogre or two, as well as so many characters from the land of myth and legend.

Long ago there was a pact made between the creatures of the magical realm and the humans, a pact that forever separated them from each other, but when young Jane is lost in the woods, she crosses the boundaries and discovers the wondrous creatures that live beyond. To return her safely to her village could cause bloodshed between humans and the magical creatures if evil from both sides of the barrier should discover what has happened. Will Jane arrive home with the help of creatures coexisting in peace together or will she become the catalyst for destruction? How did Jane cross the boundary? How will lives change if they cannot learn to coexist?

Anna Tan has created a wonderfully delightful tale for middlegrade readers on up. There is the element of magic, of creatures from myths, and lacks a time barrier to its magic. Well written in a soft voice, the intrigue is there, but the deadly violence is not.

I received this copy from Anna Tan in exchange for my honest review.