Here Is Where I . . . Wield a Really Big Sword by Brian Clopper 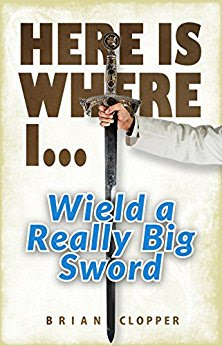 Here Is Where I . . .
Wield a Really Big Sword
by Brian Clopper

Gideon Thump knows magic abounds in his town, that a tight crew of his classmates are secretly champions of the light and face down evil on a daily basis. All he needs is proof. He foolishly trails their leader and soon finds himself no longer a simple observer. Dropped inadvertently into the role of the major hero, with heavy sword and all, Gideon must win over a supporting cast that blames him for the loss of one of their own, while facing down magical baddies that are thoroughly modern and a little absurd.
Making matters worse, his annoying cousin moves in with him and runs afoul of magic herself. With a sinister foe dead set on harvesting Gideon's fledgling magic, he must rally the troops and employ his addled wits to carve out a destiny that doesn't result in him shuffling off this mortal coil.

Once again, Brian Clopper seems to know what readers want when they are looking for incredible adventures, flights of fancy and over the top heroic deeds, even if they happen by accident! Give a child a book and they might read it. Give them one of Brian Clopper’s books and let their imaginations run wild!

Here is Where I…Wield a Really Big Sword is an action-packed delight into a world of fantasy, strange creatures, unlikely heroes and power-sucking bad guys. Even the title is entertaining and sounds almost as unsure as Gideon is when he follows some fellow students, enters into a world of secret heroes and a sword is thrust into his hands. Sounds pretty cool, right? Well, sure, except for the part that will put Gideon is grave danger, being the fresh meat on the black, so to speak.

Fabulous dialogue, highly creative scenes, the never ending battle of good versus evil only help to spotlight some of the most unique characters ever!

Brian Clopper gives readers a place to remember and want to return to, because in his books, clearly anyone can play an important part of a team effort, even Gideon!

I received this copy from Brian Clopper in exchange for my honest review.