Lament of the Fallen (The Last Bucelarii: Book 2) by Andy Peloquin 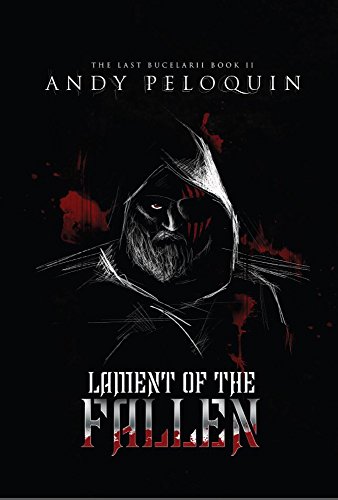 Lament of the Fallen
by Andy Peloquin

The Hunter of Voramis is no more.

Alone with the bloodthirsty voices in his head, fleeing the pain of loss, he has one objective: travel north to find Her, the mystery woman who plagues his dreams and haunts his memories.
When he stumbles upon a bandit attack, something within urges him to help. His actions set him at odds with the warrior priests commanded to hunt down the Bucelarii.
Left for dead, the Hunter must travel to Malandria to recover his stolen birthright. There, he is inexorably drawn into direct conflict with the Order of Midas, the faceless, nameless group of magicians that holds the city in a grip of terror. All while struggling to silence the ever-louder voice in his mind that drives him to kill.
From feared assassin to wretched outcast, the Hunter's journey leads him to truths about his forgotten past and the Abiarazi he has pledged to hunt. His discoveries will shed light on who he really is…what he really is.

Lament of the Fallen (The Last Bucelarii: Book 2)
by Andy Peloquin

The revelation of his heritage, the fact he is a half demon and his sword feeds on blood and death sends the Hunter into a vortex of despair. The voices in his head taunt him, urge him to kill, to feed his demon, even as he fights that command with every ounce of his being. He has gone from an assassin feared by all to a man on the run, from himself, his past and the urge to kill. Follow his quest to discover what and who he really is as he struggles to become something better by learning his forgotten past and uncovering the female voice that calls to him. Is she part of his past? What role does she play in his future?

Foes become unlikely travel companions and allies, but only because the Hunter hides his true self. What will happen if they discover who is he is?

Andy Peloquin’s Lament of the Fallen is a dark, full of turmoil and a telling tale of the power of an author to use his words to bring fantasy to life. With no excess fluff, Andy Peloquin guides us on a quest with one anti-hero as he faces not only his own inner demons, but a world filled with danger, deceit and abuse of power. He needs answers, he needs inner peace, but he doubts he deserves either.

Pure dark and epic fantasy with all of the ingredients needed to transport readers to another realm, another reality. A very strong addition to a magical ride into the world of The Last Bucelarii.

I received this copy from Andy Peloquin in exchange for my honest review.