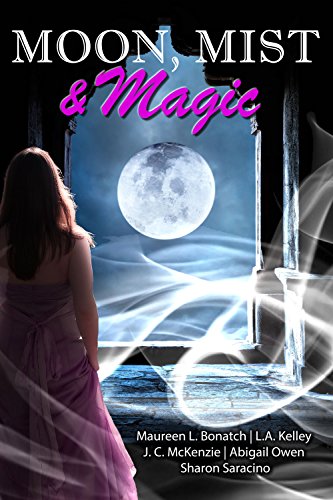 Get ready to be enchanted by mythical beasts, magical creatures, and moonlit nights. Enjoy your favorite author, and perhaps discover someone new, in these five fantastic tales of paranormal romance woven with moon, mist, and magic…

A Ghost of a Chance, by Abigail Owen
What’s a girl to do when her brother’s ghost appears asking for help? If that wasn’t bad enough, finding her not-dead-yet brother’s body before he becomes permanently spectral isn’t her only problem. Josie can’t save him on her own. The only person who can help is the last person who would want to. Bryce Evans, a man she once wrapped hopes of her future around, can’t stand to be near her. How can she convince him when her evidence is a ghost he can’t see?

Dangerous Dreams, by J.C. McKenzie
As a dragon shifter in hiding, Lara Stone wants nothing to do with others of her kind or finding a mate. No way, no how. She's perfectly content to work for a security company, masquerading as a simple mage. When the leader of all the dragon clans personally requests her as a bodyguard, Lara fears her secret is blown, or worse. What danger could possibly make Rafael Dragoi, the powerful Astarot, seek protection?

Myths and Legends 101, by L.A. Kelley
Flickering lights. Strange drifting shadows. Unnatural cold. Anthropology professor Jim Calloway is convinced the recent eerie phenomena at Octavian College are due to his overactive imagination until he meets Keilana Yamada and her eccentric grandfather, Toshi. Dazzled by the beautiful Keilani, Jim volunteers to help hunt for an ancient evil roaming the ivied halls. Can a mild-mannered academic find his inner demon hunter and a way into Keilani’s heart? Or will a supernatural predator with an insatiable hunger destroy them first?

The Keeper, by Sharon Saracino
When a stranger lands on her slab, poisoned with silver and reeking of vampire, Medical Examiner Olivia Duncan fears someone's discovered her dangerous secret. Enter Nick Alexios, a mysterious man with a hidden agenda of his own. Olivia ignites his passion and challenges his loyalties, making him question his duty. Nick might be Olivia’s salvation...or her downfall. Will honor-bound promises drive them apart or unite them against threats from both near and far?

Witch You Were Here, by Maureen L. Bonatch
Lucy is a witch with a successful business righting magical mischief. A call for help from her high-school heartache, Shane, prompts Lucy to manage his magical mayhem herself. No longer a nervous, hormonal, teenager, Lucy takes the case to force an apology and bury her past humiliation. To her surprise, Shane insists he couldn’t forget Lucy—because she hexed him ten years ago. Will Shane and Lucy put their past behind them, or will the spell prove permanent?

Want to do something just for yourself while supporting the World Wildlife Fund? The proceeds from Moon, Mist and Magic are generously being donated by these five fabulous authors who have come together to spread the magic of love with their talent!

What the world needs more of is LOVE and Abigail Owen, J.C. McKenzie, L.A. Kelley, Sharon Saracino and Maureen L. Bonatch are here to bring a little paranormal love straight to your heart! Five brief love stories, each with their own special taste of romantic torture and bliss that will make you just short of seeing dragons, ghosts, demons and more flying high above a romantic heart formation. Okay, maybe that was too much…but you will feel like love is in the air!

Imagine being part of a family with the gift to communicate with ghosts. Josie was used to seeing them, until their pleas to be heard got to be too much and she built a wall to keep them out. When her brother’s ghost breaks through and calls for help, she must go to his best friend, the one man who crushed her heart years before. Their hearts don’t stand A Ghost of a Chance against love. Great job once again, Abigail Owen!

Bodyguard/mage Lara has a secret and only her dragon knows what it is, so when she was hired to play the pseudo-girlfriend for the BIG dragon ruler, himself, who else could do such a tale justice than J.C. McKenzie? Dangerous Dreams is filled with humor from Lara’s inner dialogue, heat from the magical chemistry between herself and Rafael and evidence of how far a woman scorned will go. Hot enough to grill a steak!

Want a Hawaiian Punch? Check out L.A. Kelley’s Myths and legends 101 as a down on his luck academic learns there really are things like demons and his Hawaiian demon hunting student is more than just a sweet old man with a beautiful granddaughter. Jim is about to discover there is more to life than the material things and love makes life magical. Sweet enough to satisfy the romantic in everyone.

Sharon Saracino steps up with The Keeper, Medical Examiner, Olivia Duncan is used to seeing dead bodies on her operating table, even supernatural ones, but this one smells of vampire, not good for a woman with a secret she is loath to reveal. When the mysterious Nick shows up, a man with a hidden agenda, once again the chemistry of romance and love muddy the waters of duty and sworn oaths. What must Olivia do to keep both herself and those she has learned to care for safe? Can there be a happy ending? The perfect escape from reality!

A chance to set things right, a chance to show you are not the bullied little girl anymore and a chance for love to cast its spell. Maureen L. Bonatch brews up Witch You Were Here and gives Lucy and Shane a chance to clear the painful waters of the past, but will the hex Lucy placed on Shane be too powerful to break, leaving them still hurting or will love create its own potion for these two?