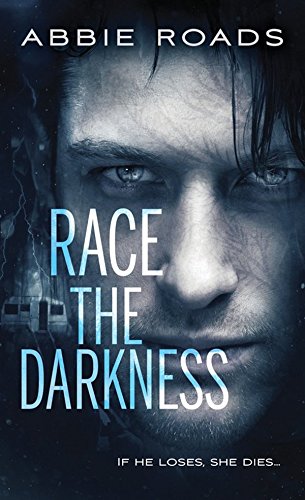 Race the Darkness
by Abbie Roads

Cursed with a terrible gift...
Criminal investigator Xander Stone doesn't have to question you-he can hear your thoughts. Scarred by lightning, burdened with a power that gives him no peace, Xander struggles to maintain his sanity against the voice that haunts him day and night-the voice of a woman begging him to save her.
A gift that threatens to engulf them
Isleen Walker has long since given up hope of escape from the nightmare of captivity and torture that is draining her life, her mind, and her soul. Except...there is the man in her feverish dreams, the strangely beautiful man who beckons her to freedom and wholeness. And when he comes, if he comes, it will take all their combined fury and faith to overcome a madman bent on fulfilling a deadly prophecy.

The day he was hit by lightning was the day Xander’s world changed and no person’s thoughts were private around him. Scarred from the strike, Xander received a gift or maybe a curse, the ability to read people’s thoughts. But he also heard cries for help and he had no idea where they were coming from.

Held prisoner by a brutish and insane woman, Isleen knew her days were numbered, if the beatings didn’t kill her, the lack of food and water would. Her only escapes were her dreams of a man, a man with power, the man of her heated dreams, but her mental calls to him went unheeded. Was he just a figment of her imagination or was he a flesh and blood savior? And then he appeared in the flesh, and his fury and wrath would set her free.

Isleen is the target for death and Xander finds she has managed to thaw his dead and frozen heart, but if he tells her, will she run away, screaming? So many secrets, so much past history that have intertwined these two psychic souls and they are completely clueless. What they do know is that together they are a formidable team who give each other strength and apart they are missing their other half.

When Isleen disappears, only her bond with Xander stands a chance to save her before religious zealots end her life because of her gifts. What she discovers is the identity of the man who tried to take her life, the man who killed her mother and now she also knows why.

What a dark and twisted tale of dysfunctional families, self-acceptance, love and deadly danger, Race the Darkness by Abbie Roads is a thrill ride of great writing and magnetic reading! Two souls, both with unique gifts find each other, was it Fate? Xander is tough, cynical and lonely. Isleen is his polar opposite, in spite of the years of captivity and abuse she has endured. Together, they complement each other perfectly. Prepared to want to disinfect yourself when you come face to face with the “villains” and their depraved acts. This is a great read for suspense lovers who like a touch of the paranormal in their thrillers!

a Rafflecopter giveaway
Posted by Dii at 6:59 PM