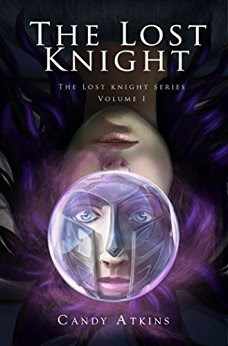 The Lost Knight
by Candy Atkins

How am I supposed to save the world when I'm not strong, not brave, not smart, and not particularly good at most things? I ran away from home the day after my thirteenth birthday when Auntie and her weird friend attacked me. Now I'm on the run with the Grim Reaper and a scary soldier. And I'm no longer on Earth. They were expecting me to be a Knight. The savior that's supposed to stop a war and prevent the invasion to Earth. But I'm not. They grabbed the wrong girl. I just don’t know how to tell them.

What were you like at thirteen? Agatha was a loner, she never knew the warmth of her parents’ arms. She lives with two distant, cold and emotionally abusive guardians. Sher escape was her tiny bedroom and her painting that would take her away from the life she knew as a misfit, even at school. Let’s not forget that stupid birthday tradition her “Aunt” has of making look at a marble and tell her what she sees. Hey, the woman is whacko.

When Agatha awoke in the middle of the night with the Grim Reaper in her room, her world was about to take a sharp turn, actually her world was going to be left behind for the world of Ashra where elves, fairies, Minotaurs and more have been waiting for her, because she is the last of the Knights, the only ones with the ability to find and destroy the key that would re-open the portals between Ashra and Earth. And that marble? It’s an Orb that will guide her. Follow Agatha, and her new friends, Jonah (falsely called the Grim Reaper) and Dathid, a fairy prince/warrior as they prepare Agatha to become the person she was meant to be.

Oh. My. Goodness. You want to know how a real teen would react to all of these life-changing moments? Tune in as Agatha tells her story, complete with her mental dialogue that is both charming and laughable at the same time! The Lost Knight by Candy Atkins is a heartbreaking, heartwarming and completely enchanting read about a young girl, alone, lost and starving for the attention and affection she never got, only now, she doesn’t know how to react to it now that she is being showered with it all!

I cannot recommend this tale enough! I have never seen such genuinely real characters come to life so well, all through the eyes of a young teen caught between childhood and young adulthood and ill-prepared for what she is about to undertake. Start to finish, this is well-written fantasy that shouts: READ ME to all ages, and even better? No teen romantic angst on a single page. Candy Atkins, you have a winner here! A true gem!

I received this copy from Candy Atkins in exchange for my honest review.