The Shackled Scribes by Lars Teeney 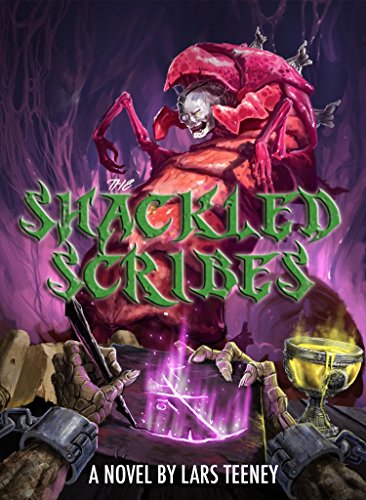 The Shackled Scribes
by Lars Teeney

Futharkia is a city built upon the layout of an ancient rune shape, and a foundation of slavery. The Broxanians have been enslaved by the Olgoikhorkian Masters to exploit the Broxanian talent for rune-scribing. In exchange, the rune-scribes are compensated with the sweet, golden liquid, Ichor, that the giant worm-like Olgoikhorkians secrete from their glands. The Ichor also happens to be highly addictive and psychoactive. The system has worked for millennia.

However, the Great Fern Jungle that surrounds Futharkia is dying, being bleached white by some unseen force. Coupled with the fact that the simian-like Fern Lice have been hunted to near extinction to provide for Futharkia's ever-increasing demand for food, Futharkia's ecosystem is near collapse. It is amid this setting that Cyesko Limariar, an aging rune-scribe makes one last attempt at greatness to lift himself out of poverty, even if by fraudulent means.

The Shackled Scribes by Lars Teeney

They were slaves to their conquerors, slaves to their addictions, but they were also gifted rune scribes and their talents were as treasured as the Ichor they received as a reward. It has been this way for centuries, and would continue far into the future, or so the Masters thought. Around the city the Great Fern Jungle was dying, many of its creatures being hunted to extinction. Is there a rune with the power to save the eco-system or have these beings only repeated the mistakes of others?

Always expect the unique, unusual and fascinatingly different from Lars Teeny and you will never be disappointed as he takes us to the city of Futharkia as they are about to meet their greatest peril. The Shackled Scribes is a journey to a land of unusual creatures, where feathers and beaks replace hair and mouths and the names are tongue twisters in themselves. If you’re like me, I don’t let the names distract me from the tale, I kind of hum through them, no offense Mr. Teeny!
Be prepared to exercise your imagination and remember to cut the cords of reality completely as Lars Teeny takes you through his twisted tale of fantasy that even makes a statement on a couple of contemporary topics, either that or I took my own fantasy trip without the Ichor!

I received this copy from Lars Teeney in exchange for my honest review.