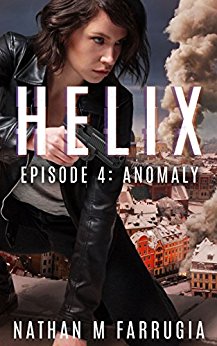 After Marina washes out of training, she’s sent for termination. But when a rebellion rises, she escapes to join Olesya on the icy coast of the Baltic Sea. Here, she finds the popularity and power of a violent anti-genetics movement spreading like wildfire. They’re called Purity, and they want people like Marina to burn.

While Marina and Olesya are ensnared in a battle against Purity zealots, another rebel, Sophia, discovers more about Project GATE than she bargained for: every recruit carries a genetic kill switch, and someone is planning to use it.

Now it’s a race against time. Marina and Olesya must overcome impossible odds and Sophia must fight to save her fellow operatives from their own bodies. Success is everything, failure is death.

Immersed in high-powered action, Nathan Farrugia’s 4th addition to the Helix series of novellas reveals hidden truths for the genetically enhanced warriors who work within the shadows doing what must be done. Anomaly lays bare the decit and lies the Project Gate creators have kept hidden in their quest for god-like control. Marina failed to make the grade as a Project GATE warrior and only the rise of a rebellion saves her from death. Purity wants an end to those like Marina, but clearly there is more to their cause, as she discovers.

Sophia has intel that will rock the rebellions to the ground as they learn that their lives could be forfeit at any time, as the clock ticks down and the enemies are coming at them for all directions.

Nathan Farrugia keeps the pace running hot, and never lets up as conspiracies, intrigue and espionage and the hidden world of techno war rages on. Mr. Farrugia’s attention to a military type atmosphere is brilliant as he takes us through the dark and twisted world of spy versus spy, warrior versus warrior and the war to reveal truths rages on.

Simply fabulous and hardcore reading that puts the reader in the moment page after page, after page!

I received this copy from Nathan Farrugia in exchange for my honest review.