The Good, The Bad and The Ghostly An Anthology by Patti Sherry-Crews and more! 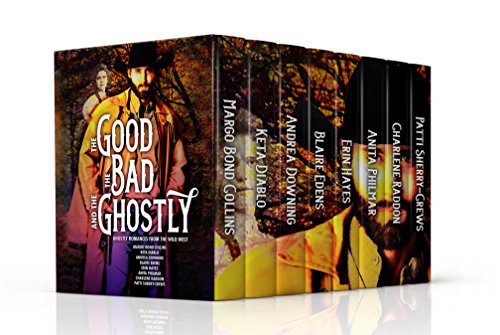 The Good, the Bad, and the Ghostly
by Margo Bond Collins

What do you get when you mix cowboys with ghosts? A collection of eight (stand-alone) amazing stories from the Old West with haunts of every variety all connected by a paranormal detective agency. The spirits are restless and Nat Tremayne is sending his best agents westward to face some of the agency’s most challenging cases.

Get your love of alpha cowboys on and feed your addiction for the bizarre (and sometimes spooky) world when you download The Good, The Bad and The Ghostly.

Bestselling and Award-winning authors are pleased to save you more than 75% on this fantastic boxed set! (Price if books sold separately).
* * *
Wild, Wild Ghost by Margo Bond Collins
With everyone she loves in the grave, Ruby specializes in the dead.

Comes An Outlaw by Keta Diablo
An outlaw returns to his childhood home to find his parents and brother dead, and the lovely widow in grave danger.

Long A Ghost, and Far Away by Andrea Downing
Ghosts are restless souls, and Lizzie Adams is one of them. How many lives will she get to find the perfect love?

A Ghostly Wager by Blaire Edens
Even a skeptical detective needs a little otherworldly help.

McKee's Ghost by Anita Philmar
The ghost living in his house might have saved him from an unhappy marriage and brought him the girl of his dreams but when his ex- fiancé returns, the same spirit turns his life upside down.

A Ride Through Time by Charlene Raddon
P.S.I. Agent Burke Jameson wants to find out if Eagle Gulch, Colorado has genuine ghosts. But he found far more than he expected, including a horse ride that could change his life forever

The Ghost and the Bridegroom by Patti Sherry-Crews
She's sent west to solve a case. What she finds will change her forever.

The Good, The Bad and The Ghostly
An Anthology by Patti Sherry-Crews and more!

Who did they call before Ghost Busters back in the day when the West was wild and ghosts and demons could be downright nasty varmints? The Tremayne Agency, of course! Eight authors have gotten together to tell tales of the supernatural and take us back to the time when the West was being won. Feisty women, rugged men and hauntings from ghosts with something to share. All they need is a conduit into the world of the living, are they on a mission for justice or love?

Margo Bond Collins’ Wild Wild Ghosts is the tale of a spooky showdown that makes the gunfight at the OK Corral seems like child’s play. Two totally different personalities join forces in more ways than just for business, but are they meant to be together? Who knew that battling spirits and demons from beyond in the nineteenth century was the forbearer of methods used today?? A fun read, not too “spooky” with a touch of spice that will make you smile!

Keta Diablo’s Comes an Outlaw depicts the rugged life of those who dared to blaze trails into the wilderness and turn untamed land into a place called home. It tells of home, heart and the longing to belong while believing in the unbelievable.

Andrea Downing’s Long A Ghost, and Far Away tells of a wonderful and brilliant young woman who has lived many lives while looking for her one true love. Will this be the time? Is Colby the man she has been waiting for? Wonderful characters in a hauntingly good tale!

Blaire Edens’ A Ghostly Wager combines a brutal subject with a touch of the supernatural as one woman, although brave on the outside, is still the product of her long ago past. With the help of a protective detective with some “otherworldly” assistance the ghosts of her past can be laid to rest.

Erin Hayes shows us the difference between a simple ghost story and the making of a legend in How the Ghost Was Won. Part suspense, part written maze filled with twists and turns, one woman finds the strength to pursue her beliefs and just maybe will find love along the way.

Anita Philmar proves in McKee’s Ghost that even in death, the love of family can create an unlikely “guardian angel” who is both matchmaker and brave detective. All they need is a way to communicate with the living. A tale of love, deceit and one ghost on a mission to uncover it all.

Charlene Raddon’s A Ride Through Time In the re-named Tremayne Agency, P.S.I. Agent Burke Jameson travels to Eagle Gulch in search of ghosts. What he discovers is that his future may be found in an era he never thought to see.

Patti Sherry-Crews’ The Ghost and the Bridegroom Adds a touch of humor to the romance that builds between an agent sent to solve a case out west that will be the starting point of a life she never imagined. Gives meaning to Go West, because you may just find your dreams.

I received this copy from Patti Sherry-Crews in exchange for my honest review.