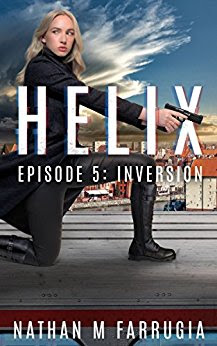 As the Purity Party celebrate their victory with a march through Wrocław, Olesya learns of a covert death squad lying in wait, poised to slaughter thousands.

Their objective is simple: blame Olesya’s team for the attack and rally support for Purity. To thwart their plan, Olesya must call on the last person she wants to ask for help—Sophia.

Together, they discover the death squad is just a diversion from a larger attack—a powerful Russian weapon that will incinerate Wrocław, killing millions. With the stakes now higher than ever before, Olesya and Sophia have twenty-five minutes to stop the weapon before it’s too late.

This is the fifth episode in the action-packed Helix technothriller series by ex Australian recon soldier Nathan M. Farrugia. If you like conspiracy, espionage and edge-of-your-seat suspense, then you’ll love this thrilling cross between Jason Bourne and Dark Angel.

To read more about the Helix series, visit helixseries.com

The battle rages on, becoming more divisive, more unstable and much, much more deadly. She must call on the last person she wants to ask for help. Olesya and her team are about to be blamed for the murder of millions, IF she cannot stop the event first. A powerful Russian weapon is poised to incinerate Wroclaw and the clock is ticking and ticking toward zero hour and only with Sophia’s help, can the countdown be halted. Twenty-five minutes remain on the clock and the world is unknowingly waiting for two women to work together and trust one another…and the clock is still running…

Nathan Farrugia has got to be the crown prince of action, espionage and techno-thrillers as he serves up another pulse-pounding episode of Helix: Episode 5: Inversion Forget the edge of your seat…there will be no place to rest and take a breather in the most current non-stop tale from this talented author! Mixing different factions in a dog eat dog world where death is the only way out, Nathan Farrugia powers through another over-the-top read as death squads, the Purity Party, former Fifth Column Operatives with their advanced capabilities, the Russian Hunters and more play the game of death where passing "go" alive is almost miraculous.

Deserving of Prime Time Television, this Techno-Thriller series is off the charts brilliant with kudos to author Nathan Farrugia for bringing each scene, each character and every chaotic conflict to life. Not sure you are into this type of episodic read? Trust me, it is worth stepping out of your comfort zone to run on the wild side!

I received this copy from Nathan Farrugia in exchange for my honest review.
Posted by Dii at 9:53 PM