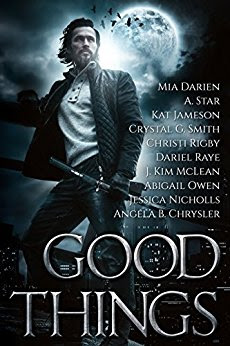 Magic and mayhem. Vampires and gods. Cops and werewolves. The binding thread of mysticism in the modern world and acts of kindness, small and large, random and focused. Join these ten authors as we travel through their worlds.

All of the author proceeds from the sales of this anthology will go to the Random Acts Organization, sponsoring kindness throughout the world. This is not official Random Acts merchandise, but is a fundraising project under permission from the charity.

GOOD THINGS the perfect name for the stories, the authors and the cause they are writing for. Prepare to feel good yourself as ten authors give us their best offerings under one cover for a worthy cause. With a complete range of talents, tales and styles, get ready to find new authors to follow and read, re-visit authors you already love and escape into a world of fantasy, romance, alphas and passion. As always, I have a favorite or ten, but as always, it is the overall book that shines through and every story needs to be recognized as a winner!

ALPHA ASCENSION by A.Star
Pack laws and treaties have been broken by the pack alpha and at best, he will be replaced. Is the new alpha ready to undergo the transformation and accept the responsibilities he has never wanted? A brief tale of love, loyalty and newfound strength! Short, but very complete!

FOR YOU by Angela B. Chrysler
Two soulmates are cursed by a jealous witch to never remember the other, for to remember is to die. He gave up his heart to keep his love safe, but not without a deal struck that he knows will cause him eternal pain, but will free his love to live her life, never thinking of him. But love is stronger than a curse and once again, they meet, each avoiding the reality of what will happen next. Could it be that this time love will conquer all? Dark, edgy and rife with emotion, love should never hurt this much.

WHAT WE DO FOR LOVE by J. Kim McLean
Alex’s life has been harder than usual lately. She has a gift or a curse that allows her to know what people are thinking. A call from her ex brings forth her feelings for the love she had to let go. Jesse is getting married and she wants Alex in her ceremony. Can Alex show her love by letting go? Can she escape in her solitary work or will she find her own desires satisfied? Sometimes reading people’s thoughts is a burden no one should have, sometimes they truly are a gift. A very good tale of homosexual love and what one will do for love, no matter their preferences.

OUTREACH:PART ONE by Dariel Raye
Jaci is far too young to look so old, but that is what nightmares and insomnia will do to a soul who has lost everything she loved. An Outreach Worker, she has a plan to start a program for young offenders. Andreus is a prisoner, since he was 16. Different and shunned or feared by others, what or who he really is will be witnessed by Jaci at the moment her life flashes before her…I see a great story here, amazing characters and will definitely look for the series.

PERSONAL RESPONSIBILITYby Mia Darien
She is a witch working for a special branch of the FBI and has been assigned to protect a vampire, the star witness in a newsworthy trial that could get him killed. Supernaturals have long been outed and the object of scorn and death from human groups. Her job heats up when she must save the sleeping vamp from an arsonist’s fire. Not only is her the first vampire she has ever known, he is more human than she dared to believe.

PSYCHED by Abigail Owen
She has psychic abilities, she can understand all languages and more. Once held prisoner to be used as a weapon, she is free now and uses her powers to help others, even at the risk of her very own life. When working with the charming and seductive Daniel Cain, Quinn finds she is more attracted to this man than she should be and how well he reads her is both tantalizing and terrifying. Can she trust Cain to keep her safe in a world of surveillance and espionage? Can she trust him with her heart?
Once again, Abigail Owen brings life and believability to the world she brings us into with well-fleshed characters, intense suspense and the passion of attraction!

KAMRY’S HOPE by Crystal G. Smith
Kamry was finished with Steven’s abuse. His mouth was like a razor, slashing through her very soul, his temper left her bruised and scarred. Now she needs to protect herself, to get back the inner power that was stolen from her. It was Jose who helped build her confidence, and it was old Ms. Maybelle who kept her heart strong. The day that Ms. Maybelle passed, was the day that Kamry learned of the impossible and met a man that would change her life and her heart forever, but not until she once again relived and beat the nightmares of the past. It all happened because of Jose and Ms. Maybelle.

AN ACT OF LOVE by Kat Jameson
She came to remembering nothing about the accident. Tom lay next to her, unconscious and bloody. A stranger had stayed with her giving her comfort until help arrived. Jesse and Tom had been in love all their lives, but now she was losing him. What is she willing to sacrifice to save him? Would she make a deal with the devil or an evil god? What will it cost her?

WINDSONG by Christi Rigby
Jemine wanted to go home, but she had no money, no means to and as and troubled as her young life has been, even the kindnesses bestowed on her by others were difficult to accept. Part Lakota-part white, she had fallen under the care of CPS and became a number in the system. It was a Druid who accepted her gods and spirits, believing in her visions and determined to take her back home, but will she be accepted? Whose spirits and gods guided her way? Is faith in a more powerful being like a guiding light bringing others home?

THE WILL OF NYX by Jessica Nicholls
He was a soldier in the bowels of a war he wouldn’t survive, his dreams were to find his love in a special place he had dreamed of. It has been five years since Scott’s death, but now a young woman is haunted by the lack of love in her life, her need for love and family and a snese of home. Amanda has seen her true love in her dreams, but in reality he is nowhere to be found. Will the goddess Nyxx be the guiding force that brings a man beyond the veil of death and a woman craving love so badly, she would rather die without it? Perhaps these two are more than mere mortals and perhaps the gods are involved in their real love story. But will it have a happy ending?