A Portrait of Valor by Wolf De Voon 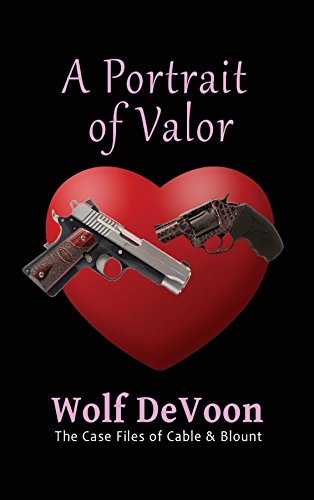 A Portrait of Valor
by Wolf DeVoon

A romance of steely courage and passion, Wolf DeVoon has created a culturally incorrect detective genre that he calls bang-ow, with sex scenes. In this first volume of a planned series, Chris Cable, P.I., a tough Marine Corps combat vet and former cop who went private, is released from jail after shooting a man in the back. Los Angeles homicide honcho Lt. Barry Mintz angrily threatens prison the next time Chris kills someone.


From the first page of this book, we know that Chris hates killing. He does everything possible to avoid it, tries to talk people down. His clients are in trouble, ready to pay thousands to make something bad go away -- and it always ends up making enemies who want Chris Cable dead. To kill or be killed is a horrible kind of karma.

A Portrait of Valor by Wolf De Voon

There is no genre that perfectly fits Wolf De Voon’s tale. The murder/mystery portion has strength and a feel of old time tales in a modern society. The romance, well, it definitely is heated, passionate and detailed, written with a bold hand that avoids the dreamy words that make hearts swoon. Each face of this tale is well-written, but together, they could have played off each other better. Definitely earthy, definitely filled with twists, an interesting tale that spans time and untold secrets.

I received this copy from Wolf De Voon in exchange for my honest review.