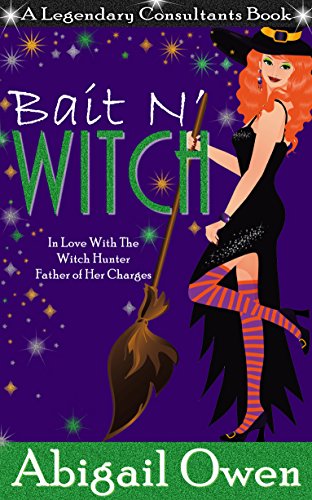 In love with the witch hunter father of her charges...

Rowan McAuliffe has been hiding most of her life. Secretly trained in her powers by an unusual source, she’d been taught not to trust anyone. Especially other witches. However, after she was forced to perform a hateful act against her will, she now hides from the Mage High Council who seek answers, and possibly her life.

Greyson Masters is the Council’s best enforcer–a witch hunter who lays down the law. Despite the danger of his job, Greyson is also raising his triplet daughters. Alone. Budding new witches who display an alarming combined power no one understands. Too bad he hasn’t got a clue how to deal with them.

Little does Greyson realize that the new nanny sent to him by Legendary Consultants is the very witch he is hunting. When the truth is revealed, can these two opposing forces find a way to listen to their hearts? Or will Greyson have to follow orders and kill Rowan–the one woman who has made his soul come alive?

Mark your calendars and your TBR lists with Abigail Owen's BAIT N' WITCH. Of course, you will want the first two books in the Legendary Consultants series, too!)

Who knew that one of the best places to hide out would be in plain sight? That wasn’t exactly Rowan’s plan, when she became the nanny for three little witches, who, together spell trouble with a capital T! The High Mage Council is on the hunt for Rowan, and if they find her, it could mean her life. Turns out her new boss is the council’s best enforcer and he always gets his witch.

Far more powerful than her records would indicate, Rowan is hard-pressed not to use her powers to make life easier when her new charges and their father test her resiliency! What no one expected was that a power greater than all of them combined was at work in the background. Love and all of its complications will make the truth of who and what she is even more painful. There are always choices and hopefully love will win out over a doubtful justice.

Shades of good witches, clever little witches and one hunter falling in love! Abigail Owen tells a fun tale about trust and the magic of love! I swear, there were times when sparkly dust should be coming down, then again, there were times darkness and fear rode roughshod. In the end, he had a job to do, but could he do it? Would his triplets let him? What about his heart?

Abigail Owen has some great characters working together to bring a little chaos, a little danger and a lotta love to her readers. Park your broom, brew some tea and settle in for some wonderful reading!